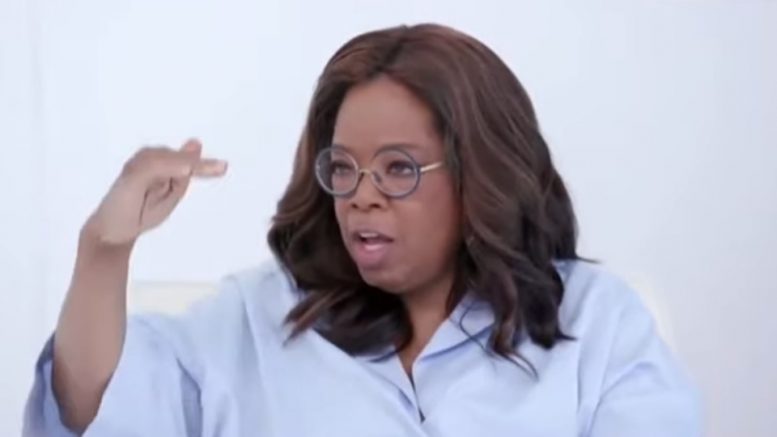 Billionaire mogul Oprah Winfrey suggested that no matter where “white people” are in their position on “the ladder of success,” they will always have an advantage over others because of “their whiteness” and “white privilege.”

Winfrey made the remarks during an episode titled “Uncomfortable Conversations with a Black Man: Part 1”, which is part of her show series The Oprah Conversation.

As quoted by Breitbart, Oprah said:

“There are white people who are not as powerful as the system of white people — the caste system that’s been put in place — but they still, no matter where they are on the rung, or the ladder of success, they still have their whiteness.

“[Whites have a] leg up. You still have your whiteness. That’s what the term “white privilege” is. It means that whiteness still gives you an advantage, no matter what.”

As her remarks circulated, Oprah faced immediate backlash and scrutiny across social media. See Below

Here are some of the most highly-engaged reactions to Oprah’s remarks:

Oprah Winfrey, a billionaire, is lecturing Americans that white people are keeping other races from succeeding in life. 😂 #ShutUp

Oprah is worth more money than 99% of white people in this country but she has the audacity to talk about “whiteness gives you an advantage”. 🤨

Billionaire Oprah lectures the rest of us:

"You still have your whiteness. That's what the term 'white privilege' is. It means that whiteness still gives you an advantage, no matter.”

Oprah became a billionaire by talking to white people every day at 4:00pm & now she's lecturing those same people on their inherent societal advantages lmfao https://t.co/d0w0eNmL0k

Wait… so how am I not worth more than Oprah if my whiteness gives me an advantage? https://t.co/mofqHew4GU

Worth over $3.2 billion, lectures us about income equality.

Gives parenting advice, but has no children.

Am I wrong for asking why people are taking her advice? 😂🤷🏽‍♂️

Pastor Jeffress Points Out Why Dismantling The Police Is A ‘Foolish Idea’: “Seeking To Be Wise, They Became Fools”

Abrams: “There Is A Disease Of Racism…In The Veins Of America”; Leo Terrell Reacts: “It’s A Big Lie!”