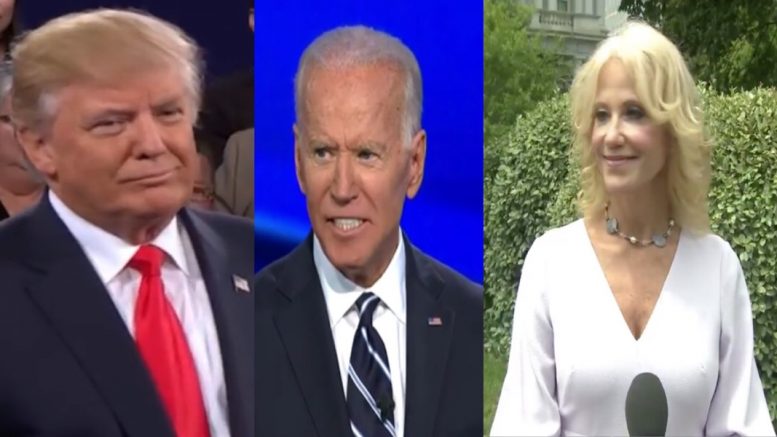 White House counselor to the president, Kellyanne Conway, told reporters on Monday that there should be more presidential debates between President Donald Trump and presumptive Democratic nominee Joe Biden ahead of the November election.

Conway’s recommendation came after The New York Times published an op-ed on Monday titled: “Let’s Scrap the Presidential Debates”, arguing the point is that the debates are meaningless– “that ‘winning’ a debate, however assessed, should be irrelevant, as are the debates themselves.”

“The country deserves to have the two party nominees, who want to be president, the leader of the Free World, out there as much as possible, addressing the issues, answering all of your questions, and showing a great contrast,” Conway told reporters. “That’s what debates are for, that’s what convention speeches are for.”

She noted that President Trump’s 2020 campaign manager Bill Stepien said on “Fox & Friends” Monday: “We want more debates. We want them to start sooner. The first debate is scheduled for September 29. By that time, 16 states will already have been voting.”

“I think that’s healthy for democracy, particularly when it’s an unusual year in so many ways, including the way our electoral process has been going with convention speeches paired down and virtual– the mail-in-ballot attempted in many places,” Conway continued.

“So for me, I think Americans would love to have more than three 90-minute opportunities to watch their two party nominees battle it out and give you a contrast, give you a choice as a voter. We deserve that. We deserve to hear Joe Biden explain why– it’s very difficult for me, I took a highlighter and was trying to find three things that improved the lives of most people I know, because Joe Biden’s been in Washington for 47 years, and there’s no yellow on the page. I think it’s fair to ask him how he’s done that,” she added. Video Below

JUST IN: @KellyannePolls calls for more presidential debates: "Americans would like to have more than three 90-minute opportunities to watch their two party nominees battle it out." pic.twitter.com/pVftU3Iw6R

(Related: Huckabee’s Advice For Trump If Biden Won’t Debate: “Hold A Debate Anyway Against A Cardboard Cutout Of Biden & A Random Word Generator”)