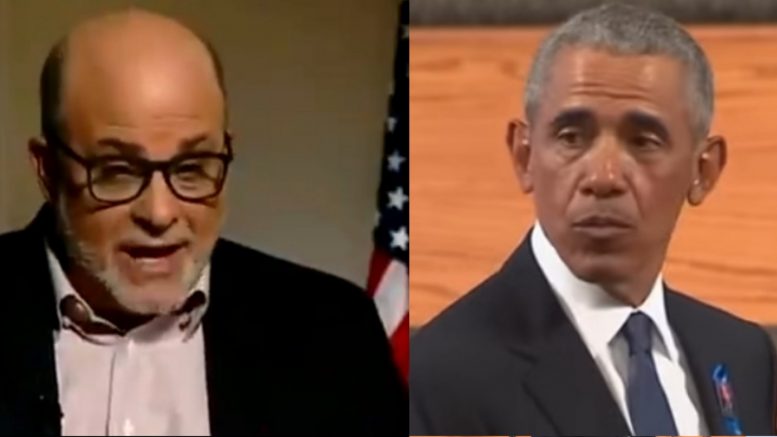 Mark Levin has a special message for former President Barack Obama in regards to remarks that were recently made at the funeral service for longtime U.S. Congressman John Lewis.

While delivering his eulogy speech to honor the legacy of Lewis, Obama appeared to vent his frustration at President Donald Trump, where he accused “those in power” of trying to “discourage people from voting,”

“Today, we witness with our own eyes police officers kneeling on the necks of Black Americans,” Obama said. “George Wallace may be gone. But we can witness our federal government sending agents to use tear gas and batons against peaceful demonstrators.”

He then went on to say, “But even as we sit here, there are those in power, who are doing their darndest to discourage people from voting by closing polling locations and targeting minorities and students with restrictive ID laws and attacking our voting rights with surgical precision — even undermining the postal service in the run-up to an election that’s going to be dependent on mail-in ballots so people don’t get sick.”

In response, Mark Levin accused Obama of being a “patholical liar” and demanded that he “let Joe Biden run his own race.”

“Barack Obama is a patholigical liar,” Levin told Jesse Watters on Saturday. “They’re trying to set the stage. It’s a close election of one or two battleground states. Systemic racism — they’ve been laying this foundation for months and months and months.”

“No, every vote doesn’t count. Every legal vote counts, and that’s the point,” Levin continued. “And when you’re asking someone for I.D. it’s not a big deal because someone needed I.D. to get into that church and to attend that service. We need I.D. all over the country for thousands of different reasons.”

“Whatever the Democrats want, it’s because they’re corrupt. They’re tearing down and burning down every institutional aspect of this society, every check and balance of this society, and remember they wanted to get rid of the electoral college too,” he added.

“I would say this to Barack Obama: You’re one of the great reasons in this country, where there is a huge racial divide and you could’ve been a great leader. You could’ve been a great leader of the American people of all races, but you couldn’t put aside your community activism…You’re a patholigical liar, let Joe Biden run his own race. You’re not going to carry him across the finish line,” Levin concluded. Video Below

The great one @marklevinshow Says Obama is a pathological liar. pic.twitter.com/XCVC1BW1Pd