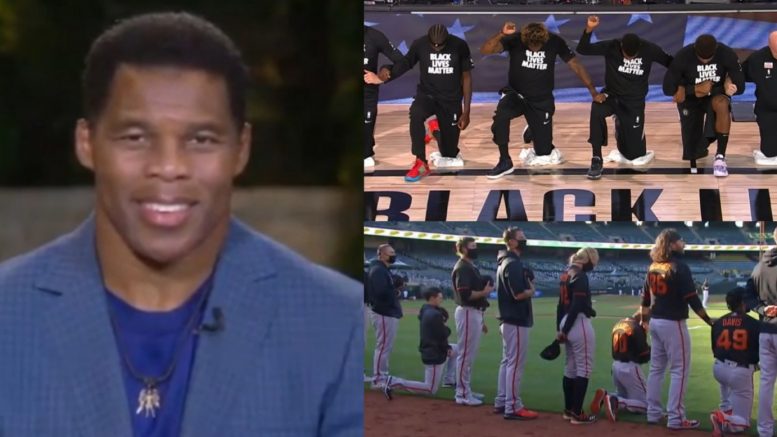 Former NFL running back Herschel Walker joined Judge Jeanine on Saturday to send a strong message to athletes who choose to kneel for the U.S. national anthem.

Herschel’s message comes as players and team staff of the NBA and MLB have embraced the “Black Lives Matter” movement by promoting the slogan, and even kneeling during the national anthem to protest so-called “racial injustice” and “police brutality,” while it remains unknown if the NFL will follow suit when their season begins in September.

In regards to players taking a knee for the national anthem, Herschel said, “It hurts because we’re he greatest country in the world.”

Moments later, Herschel followed up by slamming the push to defund police, which is a common goal of the Black Lives Matter movement that professional sports teams are helping to promote.

“We don’t defund police. Let’s be real,” Herschel declared. “If you want to win a Super Bowl, you don’t go out and take money away from your team. What you do is go out and pay players more money to get a better team. You do the same thing in the NBA. You do it in the same business you’re doing — you go put money in. You don’t take money out.”

“The police is the reason we are the country we are today because of law and order, but in today’s world they want to forget about law and order, he continued. “The way we become a country is to come together.”

“We’re being divided right now,” Walker proclaimed. “It’s sad to me that a lot of my NFL teams [and] a lot of my athletes in the NBA do not realize that right now we’re being fooled to say that this country has had its faults. It does, but we can accomplish those if we get together and we talk about solving these problems rather than fighting over these problems. We could get together and talk about solving them.” Video Below

.@HerschelWalker reacts to NBA players taking a knee during the National Anthem and protesters calling to defund the police. Check out what he has to say. pic.twitter.com/IVf8NzHczb

Jesse Watters on Kamala Harris: ‘She’s a Wounded Animal Obviously Cause the Border Is in Crisis’