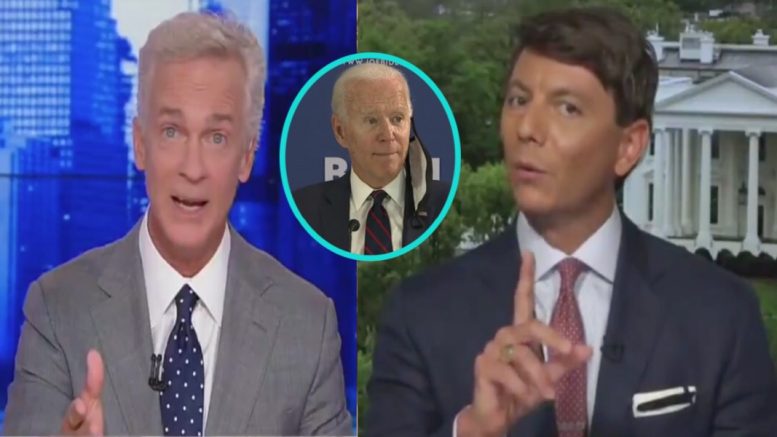 In July, Democratic presidential nominee Joe Biden said in an interview that some funding should “yes, absolutely” be redirected from police, amid calls from some in his party to “defund the police” following protests across the country.

“But do we agree that we can redirect some of the [police] funding?” Ady Barkan asked in a “Now This” interview, which prompted Biden to respond: “Yes, absolutely.”

However, Gallagher told Gidley: “He didn’t call for defunding the police, he called for reallocating money.”

Gidley interjected to say: “Trace, he said redirect. The word was redirect.”

“If you don’t think redirect is the same thing as defund, then let me redirect your your next paycheck into my bank account. It is the exact same thing, and the American people know it,” Gidley clapped back. Video Below

The media CANNOT cover for Joe Biden saying he would defund the police:

"If you don't think 'redirect' is the same thing as 'defund' then let me 'redirect' your next paycheck into my bank account!" pic.twitter.com/C6F7ZYt2Rn

In early June, the Biden campaign said that Biden does not believe that police should be defunded.

I asked Joe Biden what he thinks about this approach. Watch his answer. pic.twitter.com/vnXhhhw7Rx

Last month, the National Association of Police Organizations (NAPO) announced its decision to endorse President Trump, after two-thirds of their members expressed their support in a virtual meeting.

President Mick McHale said in interview on “Fox News @ Night” with host Shannon Bream, that they had “organized a virtual meeting” following the instruction of bylaws that have been traditionally utilized since their inception in 1978.

“And, President Trump earned that endorsement with a greater margin of the two-thirds that participated in today’s meeting,” he said. “So, it’s with great pride that I announce on behalf of our National Association of Police Organizations, our endorsement of President Donald J. Trump.”

(Related: President Of FL’s Biggest Police Union On Why They Voted Unanimously To Endorse Trump: “Tired Of…Being Used Like A Punching Bag”)

‘It’s Time To Play The Hand’: Trump Urges McConnell Not To ‘Fold’ To Dems With The Debt Limit