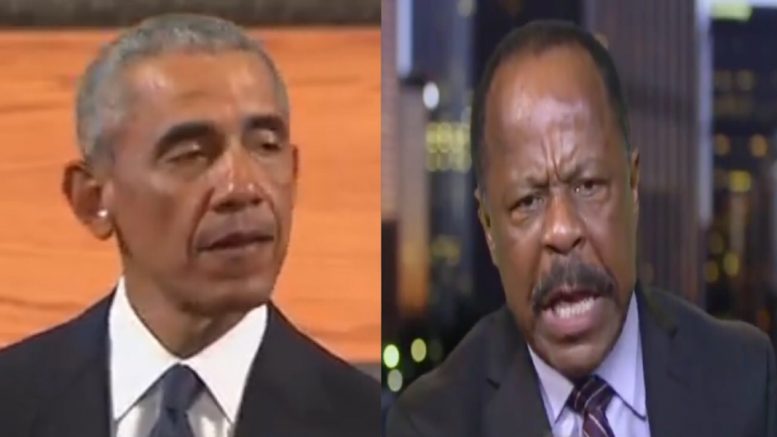 While giving his eulogy, Obama appeared to be campaigning for former Vice President Joe Biden, by pushing “mail-in ballots” ahead of the November election, calling for “eliminating the filibuster” to implement new voting rights legislation, slamming federal officers who protected federal building from rioters and anarchists, and claimed the Trump administration is “targeting minorities and students with restrictive ID laws”.

“Sean, I might explode before this segment is over,” Leo Terrell told the Fox News host.

“Let me make a public service announcement: MSNBC, Craig Melvin. I haven’t received a penny, a dime from anyone. And I’m voting Trump because he’s the best candidate to win the highest office in this land– not a penny Craig Melvin,” Terrell said, referring to an interview Melvin had with State Rep. Vernon Jones, in which the MSNBC host had asked the Georgia Rep. if was a “paid surrogate” for the Trump campaign.

Terrell continued: “Now, back to Obama. Step aside Al Sharpton, because you got a competitor, Barack Obama, using a house of worship, using a funeral, to raise a Democratic campaign speech. What amazes me is he basically lied on television when he said that federal troops were used for peaceful protesters. There’s not a peaceful protester who is trying to demolish a federal building. He tried to make an analogy that Donald Trump is George Wallace.”

“Mr. Obama, 1.2 million black people, including one more, Leo Terrell, voted for Donald Trump in 2016. It is unbelievable that he would play the race card,” Terrell expressed. “But you’re right. You got a great man in John Lewis, who was buried today, and Herman Cain is being vilified. I am sick and tired of Black Republicans being vilified. We are smart enough to realize that we’re off the Democrat plantation, and we are gonna vote what is it the country’s best interest. And then, what’s in the county’s best interest right now, is electing Donald Trump in November.”

Leo Terrell confirmed that not only will he be voting for President Donald J. Trump in the 2020 election, but it will be the “first time” in his life that he votes for a Republican, Terrell announced during an airing on Fox News’ “Hannity” on July 16.

Civil rights attorney @TheLeoTerrell has never voted Republican before in his life, but he will be this November. @seanhannity and @larryelder both try to take credit in this fun "Hannity" segment:

(Related: President Trump Calls Into Hannity & Thanks Leo Terrell For His Support; Terrell Salutes Him)

Detroit Auto Worker On His Confrontation With Joe Biden: “He Doesn’t Need To Touch Anybody’s Weapon At All”