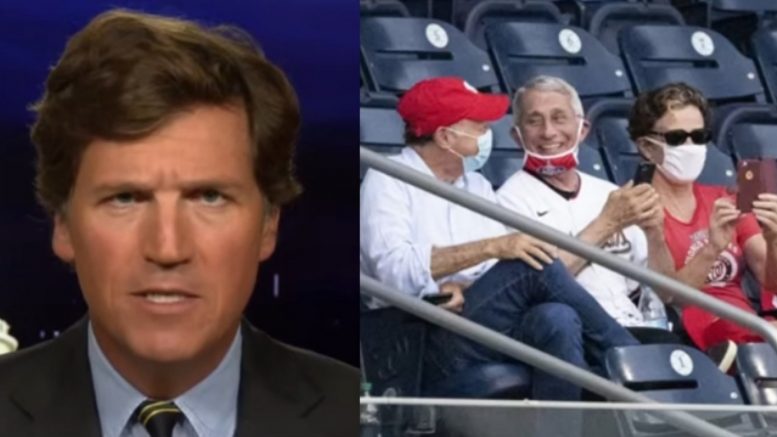 Fox News host Tucker Carlson put Dr. Anthony Fauci on full blast after he was photographed not wearing a face mask during MLB’s opening game at the Washington Nationals stadium.

Dr. Fauci has faced intense criticism as a photo has gone viral that shows him laughing with his face mask off while sitting next to his wife, Dr. Christine Grady, and a very close friend of his, who both were wearing masks.

In response to his critics, Dr. Fauci claimed that he was “totally dehydrated” and was “drinking water” when he was photographed with his mask off, although the photo showed otherwise. He also said that he was “negative COVID the day before.”

“To take some sips of water and put it back up again — I guess if people want to make something about that, they can,” Fauci said.

He continued, “Weren’t you just, four minutes ago, lecturing us about how we’re immoral if we don’t wear masks, but when you don’t do it it’s totally cool cause you’ve got good excuses — you were ‘thirsty’. No, you were laughing with your friends.”

Tucker went on to mention that Washington, D.C.’s mayor recently announced a mandate requiring everyone in the area to wear a face mask in public, or face up to a $1,000 fine.

“Until the day Joe Biden wins the national election, you, Mr. and Ms. America, must wear masks…unless, of course, you’re the people who wrote the mask ordinance in DC. The politicians — they exempted themselves…because they suspended the rules of science because they’re in power and you’re not, so ‘shut up and obey until Biden wins’ — that’s the rule. ” Tucker declared. “Masks for the, but not for me.” Video Below