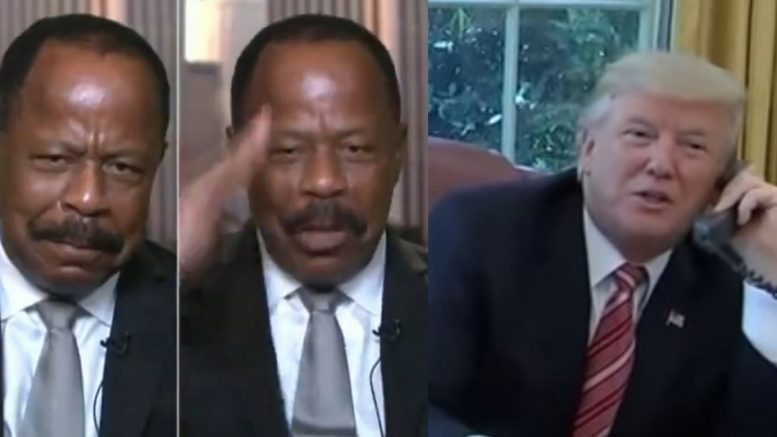 President Donald Trump made a surprise phone call into Hannity on Tuesday, where he took a moment to thank longtime Democrat commentator Leo Terrell for his support.

Terrell recently announced that he will be voting Republican for the first time in his life when he votes for President Trump in November.

Mr. Terrell has cited Trump’s unprecedented efforts to help the black community along with the Democratic Party being “hijacked” by radical ideology as reasoning behind his decision.

Related Article: Leo Terrell Confirms He’ll Vote Republican ‘For The First Time’ In His Life When Voting For Trump

“First time in my life, as a Republican, I’m voting for you,” Terrell said while pointing at the screen as the President listened.

“Now, maintain what you’re doing in these Democratic cities and I’ll go on those other networks, and I’ll battle those guys for you,” he added. “You’re going to win in November. I guarantee it. I’m out there with you 24/7.”

“You’ve come a long way, Leo, I have to tell you. I’ve been watching you and I’ve always respected you, even on the other side,” Trump replied as the Hannity panel broke out laughing.

“I’m here. I’m here now. I’m here right now. I’m here,” Terrell said to which the President replied, “I appreciate it. I do. I will do that. Thanks, Leo.”

Leo closed out the conversation by giving Trump a quick salute. Video Below

Ben Carson Calls For A ‘Real, Open Investigation’ Of The 2020 Election: “If There’s Nothing To Hide, There Should Be Nothing To Worry About”