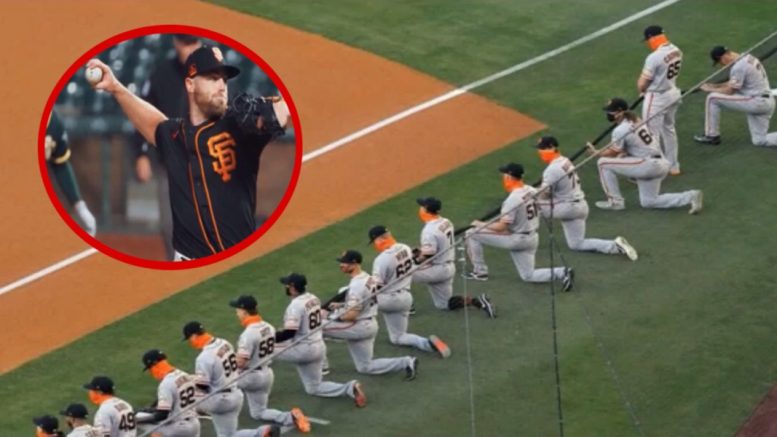 On Thursday night before the season opener, San Francisco Giants relief pitcher Sam Coonrod refused to take a knee, prior to the national anthem, saying, “I just can’t get on board with that”.

Coonrod was the only player on the team who refused to bow to the Black Lives Matter agenda.

After the game, Sam Coonrod explained why he refused to join his teammates in kneeling to the leftist ideology, expressing, “I’m a Christian. I just believe I can’t kneel before anything besides God — Jesus Christ.”

The pitcher added that he didn’t make his decision against kneeling until very near the game and also did not discuss his intentions with his team.

Giants manager Gabe Kapler said he supported Coonrod’s choice. “The one thing that we said is we were going to let people express themselves,” Kapler said. “We were going to give them the choice on whether they were going to stand, kneel, or do something else. That was a personal decision for Sam.” Continued Below

"I’m a Christian. I believe that I can’t kneel before anything besides God. I just can’t get on board with a couple things I’ve read about BLM, how they lean towards Marxism. They said some negative things about the nuclear family."

The Giants lost the game ultimately against local rivals, the Los Angeles Dodgers, with a one to eight final score.

Meanwhile, a video posted by the Los Angeles Dodgers captioned “we are one,” on Twitter, refused to show Coonrod standing for what he believed in.

"Today, we are one." pic.twitter.com/fqH8NkJm8A