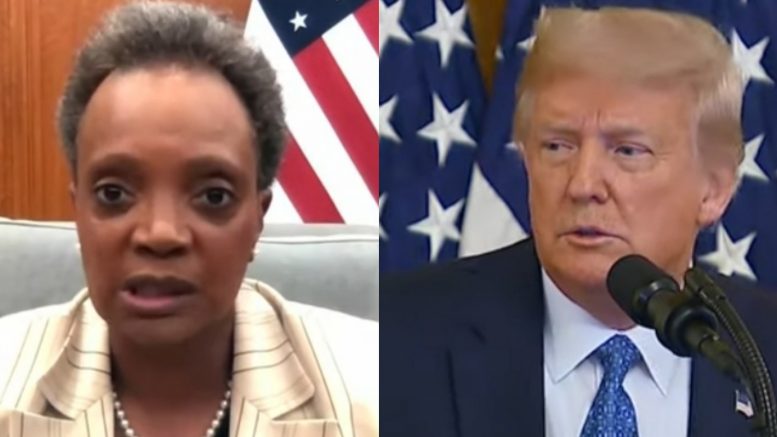 President Donald Trump appears to be sticking to his plan to send federal law enforcement agents to Chicago, despite Mayor Lori Lightfoot vowing to do all in her power to prevent such action.

Chicago has seen a spike in gun violence, where more than 20 people were shot on both Monday and Tuesday after a deadly weekend in which 63 people were shot and 12 were killed. To help control the situation, President Trump suggested that a response could be coming to Chicago and other U.S. cities similar to that seen in Portland, Oregon, where federal agents have been dispatched.

In response, Mayor Lightfoot tweeted: “Under no circumstances will I allow Donald Trump’s troops to come to Chicago and terrorize our residents.”

Just after Mayor Lightfoot sent out her tweet, Fox News reported that multiple people were shot in a  drive-by shooting at a Chicago funeral home and at least nine victims were sent to hospitals in serious condition.

On Wednesday, Mayor Lightfoot’s office issued a statement in regards to a phone call she received from the President, where he confirmed federal resources will soon be sent to Chicago to “supplement ongoing federal investigations pertaining to violent crime.” See Below

"The President reached out to Mayor Lightfoot this evening to confirm that he plans to send federal resources to Chicago to supplement ongoing federal investigations pertaining to violent crime." —Mayor Lightfoot's Press Office pic.twitter.com/CgdOuf1cYr

In ending, here is a video of President Trump discussing his plan to combat rising crime across the U.S.