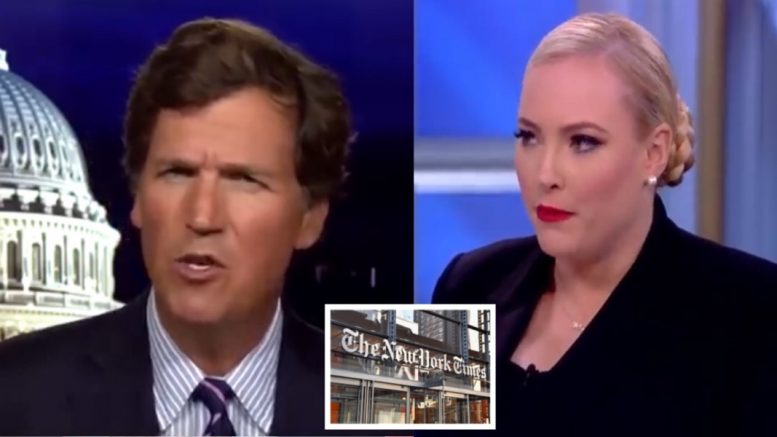 Before the end of his program Monday night, Fox News’ Tucker Carlson announced The New York Times apparently wrote a story that would reveal the location of his new home address, which could potentially put him and his family in harm’s way.

“Last week, The New York Times began working on a story about where my family and I live,” Carson said. “As a matter of journalism, there is no conceivable justification for a story like that.”

“The paper is not alleging we’ve done anything wrong, and we haven’t. We pay our taxes. We like our neighbors. We’ve never had a dispute with anyone. So why is The New York Times doing a story on the location of my family’s house? Well, you know why. To hurt us, to injure my wife and kids so that I will shut up, and stop disagreeing with them. They believe in force,” Tucker Carlson said.

Carlson reminded viewers that nearly two years ago, another such incident occurred when he was residing in Washington, D.C. An angry mob showed up at his home, forcing his wife to hide while the angry mob aligned with Antifa vandalized his home. He said the same could occur if The New York Times followed through with the story, Breitbart reported.

“It felt cowardly to sell our home and leave; we raised our kids there in the neighborhood and we loved it. But in the end, that’s what we did. We have 4 children, it just wasn’t worth it,” Carson explained.

He said that The New York Times “followed us”, adding: “The paper is assigned a political activist called Murray Carpenter to write a story about where we are now. They’ve hired a photographer called Tristan Spinski to take pictures. Their story is slated to run in the paper this week.” Continued Below

“Editors there know exactly what will happen to my family when it does run,” Carlson continued. “I called them today, and I told them. But they didn’t care. They hate my politics. They want this show off the air.

“If one of my children gets hurt because of a story they wrote, they won’t consider it collateral damage. They know it’s the whole point of the exercise: To inflict pain on our family, to terrorize us, to control, we say. That’s the kind of people they are. They’ll deny this, of course. They’ll claim it’s just journalism, just the facts. Really?” he asked.

“What if we published the home address of everyone of the soulless robot editors at The New York Times, who assigned and managed this incitement to violence against my family? What about the media editor, Jim Wendorf? We could do that. We know who they are. Would that qualify as journalism? We doubt they would consider it journalism. They’d call it criminal behavior if we did it. And that tells you everything,” the Fox News anchor added. Video Below

Meghan McCain reacted on Twitter Monday, saying “This is extremely dangerous and a weird new norm”.

This is extremely dangerous and a weird new norm. Even printing his neighborhood or building or home area is really dangerous. Why people feel comfortable doing this to people with whom their politics they hate is sick. It is the most violating thing in the entire world. https://t.co/hI67GEcaYq

We leave you with a few more responses to Tucker Carlson’s announcement:

The woke mob at the New York Times claimed my editorial in support of law and order "put lives in danger."

Shame on The New York Times for threatening to publish where @TuckerCarlson's family lives! This is more leftist garbage politics and blackmail! Where does it end? Tucker is the only uncensored conservative commentator on TV and we need his voice now more than ever.