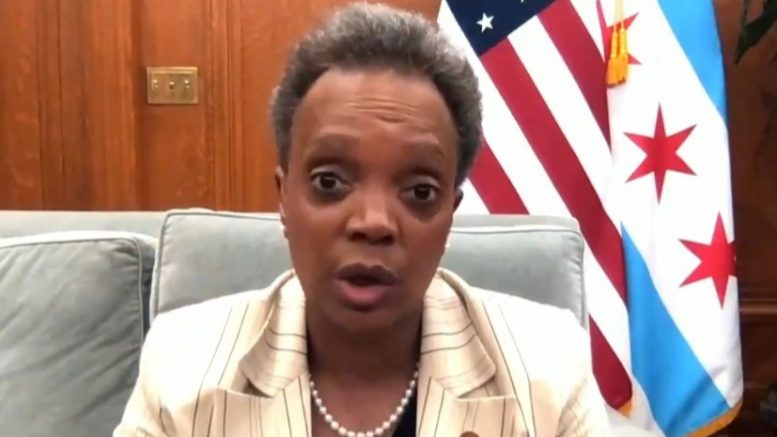 As violence and chaos continues to sweep across Chicago, the Trump Administration’s Department of Homeland Security is reportedly making plans to send up to 150 federal law enforcement agents to help get the situation under control.

On the flipside, however, Mayor Lori Lightfoot is ready to do everything in her power to prevent “Trump’s troops” from stepping foot inside of her town.

To help control the situation, President Trump suggested that a response could be coming to Chicago and other cities similar to that seen in Portland, Oregon, where federal agents have been dispatched.

In response, Mayor Lightfoot tweeted on Tuesday night: “Under no circumstances will I allow Donald Trump’s troops to come to Chicago and terrorize our residents.”

Under no circumstances will I allow Donald Trump’s troops to come to Chicago and terrorize our residents.

Just after Mayor Lightfoot sent out her tweet, Fox News reported that multiple people were shot and at least nine of them were sent to hospitals in serious condition.

It remains yet to be seen if Chicago’s mayor can really stop the Trump Administration’s efforts, however, Acting DHS Secretary Chad Wolf said they will do whatever is necessary in targeted areas whether the leaders “like us there or not.”

In ending, here is a clip of Mayor Lightfoot reacting to the prospects of federal law enforcement coming to Chicago:

Mr. President or not—I don’t care one bit what your name is. I will not allow troops in Chicago, and I will do everything in my power to stop you. pic.twitter.com/jL5TFgPPKZ

Chicago Mayor Lightfoot: ‘Your Time Is Up…This Health Order May Pose An Inconvenience…It Is Inconvenient By Design’