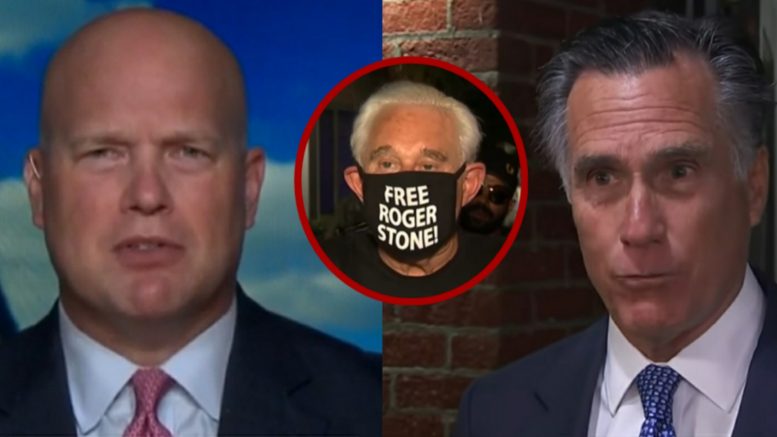 Soon after it was announced that President Trump spared Mr. Stone three years and four months in prison, Romney tweeted, “Unprecedented, historic corruption: an American president commutes the sentence of a person convicted by a jury of lying to shield that very president.”

While appearing on Sunday’s airing of Fox & Friends, Matt Whitaker was asked what he thought about Romney’s statement

“What happened with Roger Stone and the reaction is exactly what you would expect,” Whitaker said. “The people who don’t like President Trump are going to criticize him as they always do. And President Trump, in spite of that, is going to do what he thinks is right. And that’s the type of leadership we’ve come to expect from this President and what I saw being in his Cabinet.”

In terms of what President Trump might have done that was so wrong compared to commutations of past presidents, Whitaker said, “There’s nothing” and that critics of Trump, like Romney, are “trying to score cheap political points.”

“Let’s remember, the President has broad constitutional powers,” Whitaker said. “And [Trump] considered Mr. Stone’s age, his health, the COVID risk, which is very prevalent currently in our prisons, together with the perceived bias of the prosecutors and jury in Mr. Stone’s prosecution and conviction.”

“This President has used his constitutional powers sparingly. He’s looked at cases where he feels that a fairness, a fundamental fairness has not been done, and he tries to right those wrongs,” he added.

Whitaker went on to say that as time goes on, he expects President Trump will grant other pardons and commutations and other executive clemency as “that’s the way the Constitution is written.”

“And really, I think the criticism, to some extent, is unfounded,” he declared. Video Below