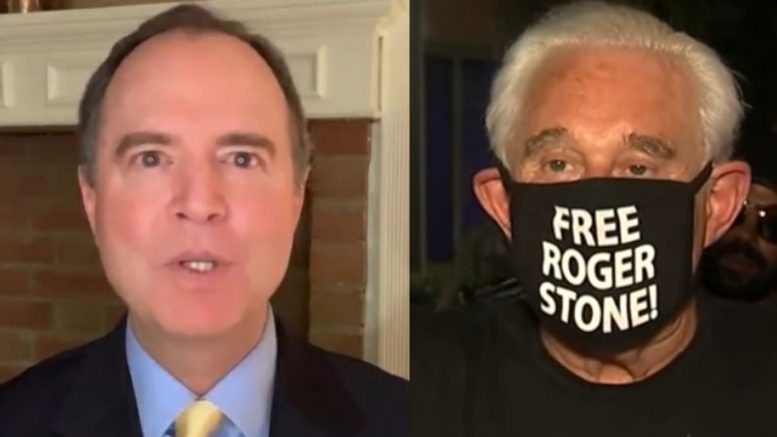 On Friday, the President commuted the sentence of his former campaign adviser who was to spend three years and four months in jail for crimes related to the Russia investigation.

White House Press Secretary Kayleigh McEnany said the President made the decision “in light of the egregious facts and circumstances surrounding [Stone’s] unfair prosecution, arrest, and trial” and “unjust sentence.”

“Roger Stone is a victim of the Russia Hoax that the Left and its allies in the media perpetuated for years in an attempt to undermine the Trump Presidency,” White House Press Secretary Kayleigh McEnany said in a statement Friday night. “There was never any collusion between the Trump Campaign, or the Trump Administration, with Russia. Such collusion was never anything other than a fantasy of partisans unable to accept the result of the 2016 election. The collusion delusion spawned endless and farcical investigations, conducted at great taxpayer expense, looking for evidence that did not exist.”

On top of the statement from the White House, Trump tweeted, “Roger Stone was targeted by an illegal Witch Hunt that never should have taken place. It is the other side that are criminals, including Biden and Obama, who spied on my campaign – AND GOT CAUGHT!”

In response, Adam Schiff called Stone’s commuted sentence an “appalling attack on the rule of law.”

“There are two systems of justice now in America, one for criminal friends of the President, like Michael Flynn and now Roger Stone, and one for everybody else,” Schiff told MSNBC host Rachel Maddow.

He added, “What we are seeing today is an appalling overture to people, essentially the President saying, ‘If you lie for me, you cover up for me, I will reward you. On the other hand, if you are a rat and you cooperate, then like a mafia boss, I will come after you.'”

Related Article: Dan Bongino Details Why Schiff Is A ‘Hall-Of-Famer In The Game Of Lying’: “He Does Nothing But Lie”

Schiff also parrotted a notion Maddow put forward earlier in her program, which is that “the President is using, through Bill Barr, a shield right now to protect those who are lying for him and covering up for him.”

“But what will be more dangerous is what’s to come and that is Bill Barr using the sword to investigate and prosecute the President’s enemies,” Schiff declared. “That’s an even more serious attack on the rule of law.” Video Below

Commuting Roger Stone’s sentence is a terrible blow to justice and the rule of law.

In ending, here is Roger Stone’s reaction to having to having his sentence commuted: