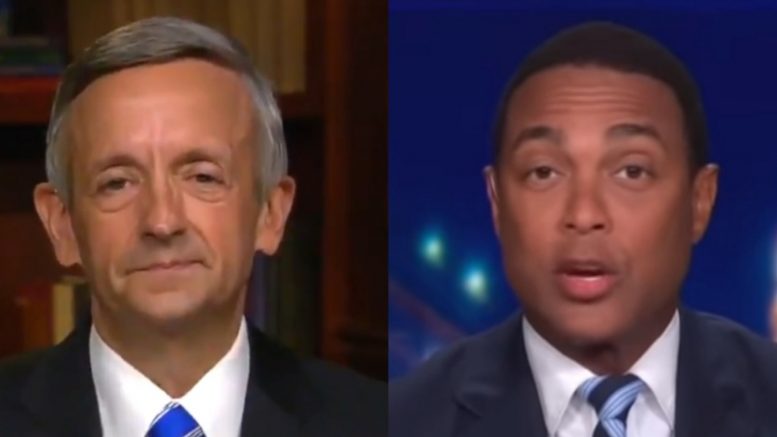 Pastor Robert Jeffress declared that CNN and their host Don Lemon are now the “uncontested champions of fake news” in wake of remarks Lemon made about Jesus Christ earlier in the week.

During a discussion with Chris Cuomo on Monday, Lemon sparked uproar from Christians after he claimed that Jesus Christ was “admittedly, not a perfect man” when he lived on earth.

“Jesus Christ…if that’s who you believe in, Jesus Christ, admittedly was not perfect when he was here on this Earth,” Lemon said.

In reaction by Lemon’s statement, Pastor Jeffress told Lou Dobbs, “This quote made CNN and Don Lemon the uncontested champions of fake news.”

“This wasn’t just some minor theological point,” he added. “Don Lemon attacked the most basic tenet of Christianity that Jesus was the perfect son of God. And because he was perfect, he was qualified to die for our sins instead of having to die for his own sins.”

Jeffress went on to say that the false notion about Jesus that was presented by Lemon “only shows how tone deaf the left is at issues of faith, but it shows the double when it comes to Christianity.”

“Just imagine if Don Lemon said the same thing about the prophet Muhammad, the founder of Islam, and said he wasn’t perfect, there would have been an outcry from millions of Muslims around the world, CNN would be on the air every hour, on the hour for two weeks apologizing for that statement,” he declared.

“Well, I think CNN needs to apologize for offending millions of Christians around the world and Don Lemon’s offensive statements, but I’m not gonna hold my breath and wait for that apology,” Jeffress concluded. Video Below

The Left’s Attack on Religion: @robertjeffress slams the radical Dems and national left-wing media for being tone deaf to people of faith. #AmericaFirst #MAGA #Dobbs pic.twitter.com/4kYXiGZ3ug