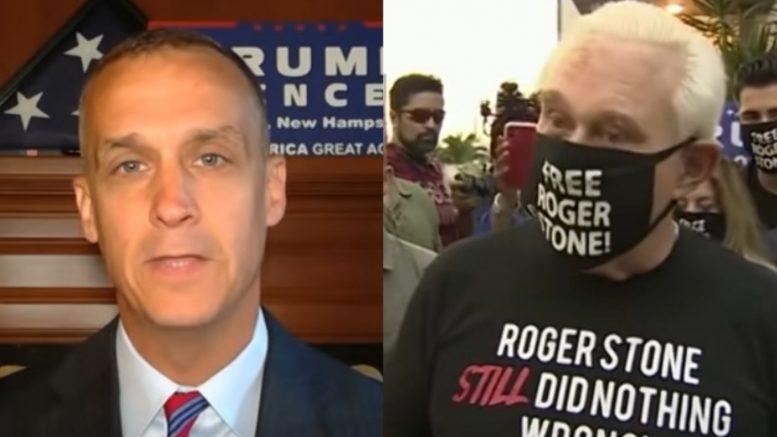 Trump 2020 senior advisor Corey Lewandowski has never been very fond of Roger Stone, however, he thinks the way Stone was treated by the government should “scare the hell out of every American.”

Lewandowski made the assertion while reacting to President Trump’s decision to commute the sentence of Stone, who was to spend three years and four months in jail for crimes related to the Russia investigation.

“I’m not a fan of Roger Stone…but the way he was treated by this government should scare the hell out of every American, that they can do that to people. You know they could do that to anybody — what they did to Mike Flynn and Roger Stone,” Lewandowski said.

“This President saw an injustice. He commuted the sentence, which is the right thing to do to make sure Roger has a fair trial and has a fair hearing — that’s very important in our system,” he added.

“Comey, Clapper, Brennan, McCabe — all the names we know have never been brought to justice. It’s time justice is blind, but those people need to be held accountable,” Lewandowski said.

Related Article: Schiff Vents His Frustration Over President Trump Pardoning Roger Stone: “An Appalling Attack On The Rule Of Law”

Lewandowski then briefly touched on the fact that former President Obama issued 1,715 commutations when he was President, but faced very little criticism compared to what has been seen in the case of Trump commuting Roger Stone.

“There’s nothing to see here,” Lewandowski sarcastically responded. “If Obama did it, it must be fine. When Trump does it, it’s wrong. That’s the Trump Derangement Syndrome that the media and the left has had since the moment he came down that big, beautiful escalator.” Video Below

Scherie Murray Slams AOC After She Calls Core Part Of Trump’s Coalition ‘Racists’: ‘We Heard This Rhetoric From Hillary Clinton’

Lin Wood Teaches Gov. Kemp A Lesson On How To Order A Signature Audit If He Really Wants It To Happen