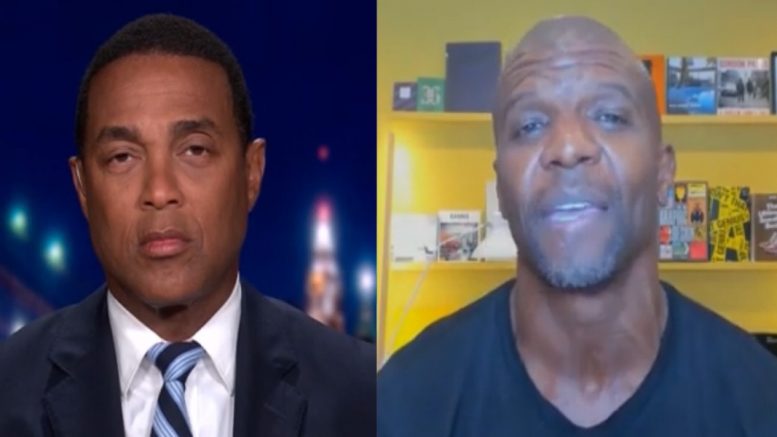 On Monday, CNN host Don Lemon told actor Terry Crews what he deems as the meaning of the Black Lives Matter. Lemon claimed the movement is about police brutality and has nothing to do with black-on-black gun violence.

Crews has come under fire for recent tweets noting that he wants to “unite people” regardless of race, creed or ideology, saying he doesn’t want the Black Lives Matter [BLM] movement to morph into “Black Lives Better.” Crews told Lemon that he was issuing a warning that BLM might be going too far, as leaders have made demands and threatened violence if they don’t get what they want, Fox News reported.

Crews brought up a surge in “black-on-black” gun violence that left multiple children dead since June 20. “The Black Lives Matter movement has said nothing about this,” Crews insisted. “Black people need to hold other black people accountable.”

Lemon argued that the BLM movement isn’t about black-on-black crime.

“But, that’s not what ‘Black Lives Matter’ is about. It’s not an all-encompassing. … If someone started a movement that said ‘cancer matters,’ and then someone came and said, ‘Why aren’t you talking about HIV?’ It’s not the same thing, we’re talking about cancer,” Lemon continued.

“So the Black Lives Matter movement is about police brutality and injustice in that manner, not about what’s happening in black neighborhoods. There are people who are working on that issue, and if you want to start that issue, why don’t you start it? Do you understand what I’m saying?” he asked Crews.

“When you look at the organization, police brutality is not the only thing they’re talking about,” Crews pointed out. Video Below

“I know that, but I agree, but that’s not what the Black Lives Matter movement is about, Terry, Black Lives Matter is about police brutality and about criminal justice,” the CNN host insisted. “It’s not about what happens in communities when it comes to crime– black on black crime. People who live near each other, black people, kill each other. Same as whites. … It happens in every, single neighborhood.”

When Crews tried to respond to explain what the Black Lives Matter movement stands for, Lemon cut him off and ended the segment.

He claims that Black Lives Matter is only about addressing police brutality. This is of course untrue, and it has many other missions including abolishing the family and removing the court systems. But far be it for anyone to say it should actually address black lives.

Twitter users responded to the interview with Crews and Lemon:

Jim Crow Joe is the face of bigotry & racism. This is what white Supremacy looks like!

That’s why Don Lemon cut off Terry Crews in that CNN segment. Crews was about to respond to Lemon’a false claim that BLM is limited to police brutality. Lemon, who by the way is in litigation for a sexual assault allegation, silenced a black man. https://t.co/yXErEMCvym

Don Lemon is still the dumbest man on television.

Not only did Don Lemon repeatedly cut @terrycrews off but he lied on camera… he said black lives matter was about police brutality but according to their 2020 campaign, that's only a small part of it https://t.co/TK07ktfcbg pic.twitter.com/ZO2rGESdsi

We told you all along… the Black Lives Matter movement does NOT care about ALL black lives. Just the ones that help further their Marxist political agenda. Don Lemon finally admits it.pic.twitter.com/wvprJiYVY6

Seems like a good time to remind everyone that a disabled man was tied up, beaten, and tortured on Facebook Live for over 30 minutes

How did Don Lemon cover the story?

Don Lemon is a sick joke.