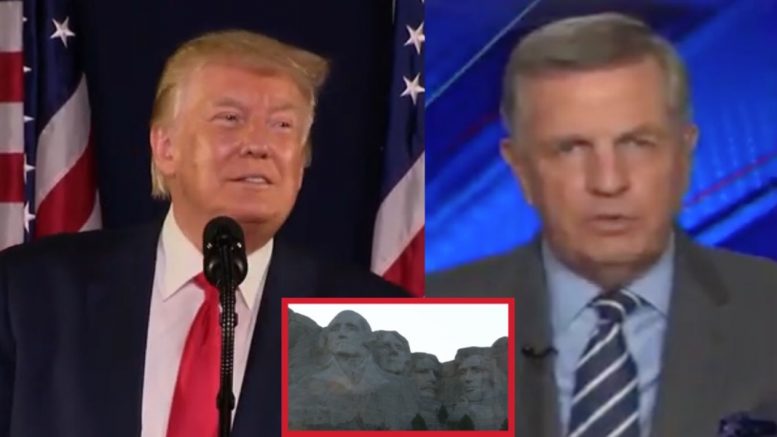 Brit Hume, Fox News‘ senior political analyst, ripped the media’s coverage of President Donald Trump’s speech at Mount Rushmore, which was on the eve of Independence Day, and he also called out Senator Tammy Duckworth (D-IL) after she told CNN’s Dana Bash on Sunday, that the president “spent more time worried about honoring dead Confederates”.

“What really struck me about this speech that the president gave at Mount Rushmore was that he spent more time worried about honoring dead Confederates than he did talking about the lives of our 130,000 Americans who lost their lives to COVID-19, or by warning Russia off of the bounties they’re putting on Americans’ heads,” Duckworth claimed.

“His speech, in its bulk, was a ringing of full-throated defense of America’s history and heroes, and there were no confederates mentioned. It wall all the Fore Fathers of our country, Washington, Lincoln, and other great Americans. And that was really the main bulk of it. So what [Sen. Duckworth] said was flat out false,” Hume pointed out.

He also noted the headlines from leftwing outlets, who slammed the president’s speech, saying, “were unbelievably misleading”.

“Some of the other headlines I saw were even worse than those,” he said, referring to some of the headlines Fox News’ Bret Bair referenced. “In fact, as I followed this over the weekend, I don’t think I’ve ever seen such dishonest and biased coverage of any event. This was a speech meant to be inspiring, and even if you think the messenger was flawed, the speech itself was quite strong and in some ways, very positive. It’s remarkable,” Hume expressed. Video Below

Here are some examples of what the media reported:

President Trump’s unyielding push to preserve Confederate symbols and the legacy of white domination was crystallized by his harsh denunciation of the racial justice movement Friday night at Mount Rushmore.

Breaking News: President Trump delivered a dark and divisive speech at Mount Rushmore, leaning into the culture wars and barely mentioning the pandemic.https://t.co/03WOgau4Zx

@ABC “racial divisions” vs. “Our Founders launched not only a revolution in government, but a revolution in the pursuit of justice, equality, liberty, and prosperity. No nation has done more to advance the human condition than the United States of America.” pic.twitter.com/Y68p0pNMfh

@msnbc’s “symbol of white supremacy” vs. “These immortal words set in motion the unstoppable march of freedom. Our Founders boldly declared that we are all endowed with the same divine rights — given [to] us by our Creator in Heaven.“ pic.twitter.com/hvA7Zz9CSW

@DeanObeidallah’s “declared war on all those who aren’t loyal” vs. “we believe in equal opportunity, equal justice, and equal treatment for citizens of every race, background, religion and creed. Every child, of every color – both and unborn – is made in the holy image of God.” pic.twitter.com/9REj3f5a7A

Perhaps @NPR thinks that Lincoln was a confederate? pic.twitter.com/xMrWrDovMg

I think I’ll take “America’s future is in our hands” over “it is time to reconsider the global legacy of July 4, 1776” any day, thanks. pic.twitter.com/AEJV8VDXEn

(Related: Trump’s Message To Media Who ‘Falsely Label Their Opponents As Racists’: “The More You Lie, Demean & Collude, The More Credibility You Lose”)

Gov. Kristi Noem Reacts After Trump Announces He Will Travel To Mount Rushmore July 3 For Fireworks