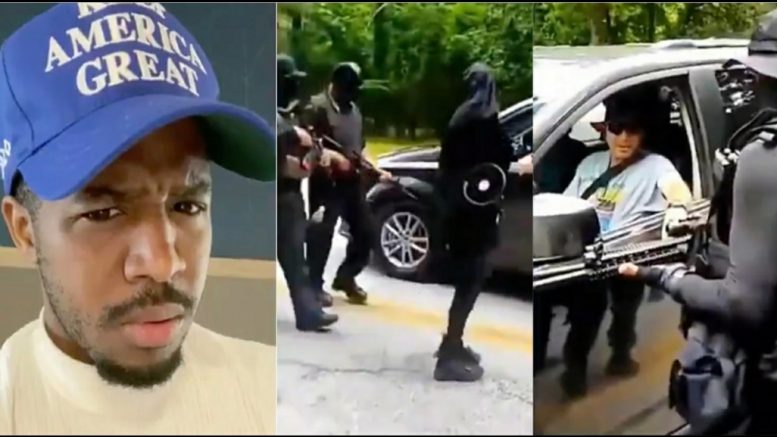 On Saturday, July 4, a “Black Power” militia known as the NFAC (Not F**king Around Coalition) marched through Stone Mountain Park heavily-armed and escorted by police.

The leader of the militia said their goal was to “send a message” about a monument in the park of Confederate President Jefferson Davis and Southern generals Robert E. Lee and Stonewall Jackson. However, during their journey, a video surfaced showing one of its members confronting a white man who was stopped in his car as the group marched by.

After trying to explain to the driver who they were, the militia-member asks, “Where are our reparations?”

“What did I do to you?” the driver asks before the armed man replies, “It’s not what you did, it’s what your ancestors did.”

The group then walks away chanting “Black Power!”

In response to the video, Terrence Williams explained that he is pro-Second Amendment, however he does not “like the fact that a bunch of racist people are walking down the street with guns, trying to intimidate white people, trying to scare white people, harassing somebody because of the color of their skin. That’s racist.”

REPARATIONS? GET A JOB!
If white people did this it would be all over the mainstream media!!

Am I right or Am I Right ? pic.twitter.com/SReuIDAs7K