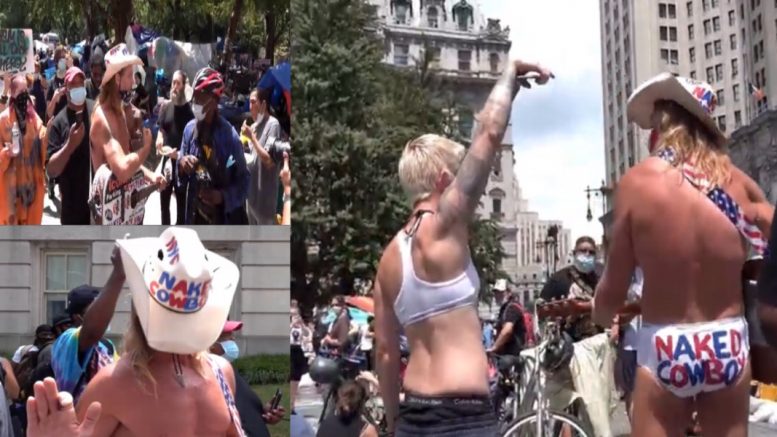 Times Square’s guitar-slinging Naked Cowboy — who famously croons in little more than tighty-whities — drifted south to the anti-cop protests outside City Hall on Tuesday, but was quickly chased away by angry demonstrators who accused him of trying to rustle up trouble, Fox News reported.

Robert Burck, the Naked Cowboy, arrived around 2 p.m. at City Hall Park, where hundreds of demonstrators vowed to dig in unless the next budget includes a $1 billion funding cut to the NYPD.

Protesters were seen swarming around and harassing the “Naked Cowboy” in New York City:

“Very nice meeting you!” Burck called to the throngs while strumming his guitar and walking off down Chambers Street.

“Get the f–k up outta here!” yelled one less-than-amused protester who followed him to make sure he got the hell out of Dodge. “We’re gonna make sure y’all leave!”

“It’ll be a free country until they get ahold of it,” he said. “They’re throwing me out when I’m doing the exact same thing they are.”

Burck maintained that he had no intention of causing trouble — noting that he even removed pro-Trump stickers from his six-string before heading out because “they don’t like that.”

“It could’ve been something positive,” he said. “I thought I was coming down here literally [to] spice up the entertainment.”