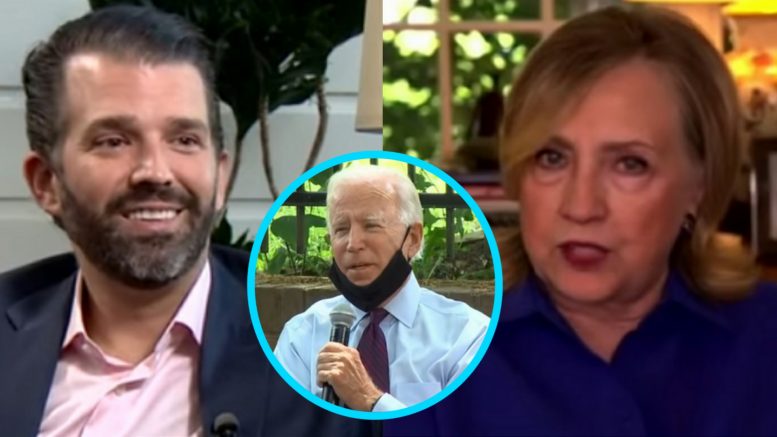 Donald Trump Jr. was quick on the trigger after former Secretary of State Hillary Clinton tried taking another jab at President Trump while making a “bet” about how Joe Biden would handle the presidency if elected.

And the topic Hillary focused on? TV ratings.

Related Article: Leo Terrell Calls On Democrats Not To Vote For Biden, Urges ‘Law & Order’ Dems To “Leave The Party”

It’s no secret that President Trump often touts his many accomplishments via his Twitter account because the mainstream media likes to keep them hidden…including the massive TV ratings his press briefings and rallies draw.

For whatever reason on Wednesday, Hillary poked fun at President Trump for tweeting about his ratings and made a bet with the American public that Joe Biden will never do such a thing if elected as president.

Hillary tweeted, “If elected president, you can bet @joebiden will never tweet about his TV ratings.” See Below

If elected president, you can bet @joebiden will never tweet about his TV ratings.

Upon seeing Hillary’s tweet, Donald Trump Jr. fired back: “Yeah, especially when you take into account that he doesn’t know how to.”

Yeah, especially when you take into account that he doesn’t know how to. https://t.co/Zs77xY86AN

Don Jr.’s short, but brutal reply comes just one day after Biden’s neverending gaffes and slip-ups prompted a question by the press about the state of his mental health.

During his Tuesday press conference, Biden admitted to a reporter that he’s “been tested” and is “constantly tested.”

👀 Biden admitted today he's "been tested" and is "constantly tested."

Did Biden take a cognitive test? What were the results? Why is he getting frequently tested? pic.twitter.com/A4NCC8w2wC

Trump Jr. retweeted the video of Biden making the statement about his mental health and simply asked, “Why would anyone need to be constantly tested for cognitive decline? Let’s see the results.”

Brit Hume Responds As Pelosi Decides Not To Hold An Impeachment Inquiry Vote: ‘Why Would She Hold A Vote?’

Sen. Graham Turns The Tables On Dems Who Are Suggesting GOP Senators Are “Blocking Witnesses”