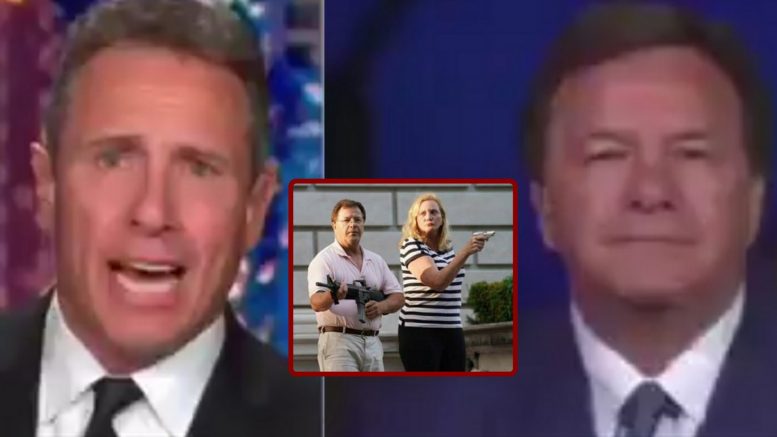 CNN’s Chris Cuomo got shredded after telling Mark McCloskey that he has now become “the face of political resitance to the Black Lives Matter movement.”

McCloskey, the St Louis lawyer who brandished a semi-automatic rifle to defended his home against protesters, fired back Cuomo and said such a statement is “completely ridiculous.”

“I was a person scared for my life, who was protecting my wife, my home, my heart, my livelihood,” he continued. “I was the victim of a mob that came through the gate. I didn’t care what color they were, I didn’t care what their motivation was. I was frightened, I was assaulted and I was in imminent fear that they were gonna run me over, kill me, burn my house.”

As context for why he felt it was necessary to take action when his gate was breached by protesters, McCloskey referenced that on June 2, he watched on live television sections of St. Louis get destroyed, looted and burned “with nobody showing up to do anything.”

“I realized at that time, we’re on our own,” McCloskey said. “When bad things happen, they unpredictably turn really bad, real fast. That same night retired St. Louis police captain David Dorn was murdered. These things get very bad, very quickly, and when those people cam through the gate, when it was a mob, I didn’t take the time to see their birth certificates or anything else. I was defending my house, my life, my wife — what I spent 32 years building there.”

McCloskey went on to explain to Cuomo that he and his wife were victims of “social intimidation* and “terrorism.”

“Chris, what’s the definition of terrorism? To use violence and intimidation to frighten the public. That’s what was happening, that’s what happened to me and that’s the damage I suffered,” he declared.

Then after Cuomo implied that the mob of people wrongfully had guns pointed at them because they were looking for the mayor’s house “as a point of protest,” McCloskey replied, “That’s an entirely false concept. No single media outlet has ever mentioned the complete falsity of that statement. The mayor’s house can not be reached through my neighborhood.” Video Below

Predictably, Chris Cuomo doesn't like when people come up to him with his family, but if you're someone like Mark McCloskey, he doesn't care about your safety. Instead, he lectures McCloskey as the one who was in the wrong, not the mob.

In ending, here is a clip of McCloskey mocking Cuomo a “mind-reader” during his interview:

Chris Cuomo ends with back-handed swipes at Mark McCloskey as an image of whiteness and opposition to Black Lives Matter, so McCloskey fires back with some 🔥🔥🔥🔥 : "I'm glad you're a mind reader because no one else thinks you are." pic.twitter.com/ewowmBeSFg

Biden Says Ghost Guns are ‘Not Hard to Put Together’, Rep. Massie Reacts: ‘He Couldn’t Make one if his Life Depended on it’

AOC Fumes As Rep. Boebert Posts a Photo of Her Boys Holding Rifles in Front of a Christmas Tree