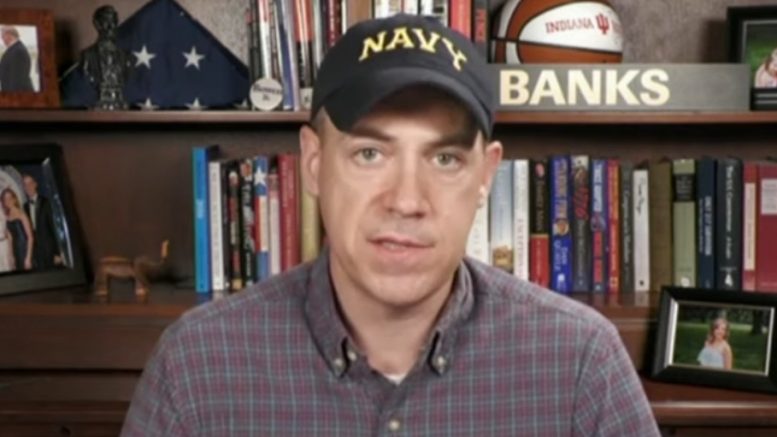 After being briefed by White House Chief of Staff Mark Meadows on Monday, Congressman Jim Banks issued a statement, where he exposed the “real scandal” related to the New York Times’ latest “hit piece” accusing President Trump of ignoring intel that Russia placed bounties on American soldiers in Afghanistan.

Banks, who served in Afghanistan during the time the bounties were allegedly made, claims that NYT’s story is false and that the media and members of Congress rushed to judgement over “unconfirmed intel in an ongoing investigation” that was leaked to smear the President. It’s now “impossible” to complete the investigation, and as a result of Banks declared “blood is on their hands.”

In a thread posted on Twitter, Rep. Banks stated the following:

I just left the White House where I was briefed by CoS @MarkMeadows and top intelligence officials. They discussed @nytimes’ hit piece falsely accusing @realDonaldTrump of ignoring reports that Russia placed bounties on American soldiers in Afghanistan.

The real scandal: We’ll likely never know the truth… Because the @nytimes used unconfirmed intel in an ONGOING investigation into targeted killing of American soldiers in order to smear the President. The blood is on their hands.

Having served in Afghanistan during the time the alleged bounties were placed, no one is angrier about this than me.

Now it’s impossible to finish the investigation. All b/c the @nytimes will do anything to damage @realdonaldtrump, even if it means compromising nat’l security.

Sad, but many in the media & Congress rushed to judgement before learning the whole story. We should treat anonymously sourced @nytimes stories about Russia w/ skepticism.

Here’s a fact: No President in my lifetime has been tougher on Russia than @realDonaldTrump.

THEY SEE President Trump’s rock solid record in support of our troops, our veterans & American exceptionalism. THEY SEE the media walk back claims of a Trump-Russia scandal over & over. So tired. Change it up!

Related Article: Jason Chaffetz On Pelosi: “Shame On Her!… If She Has Evidence, If She’s Heard A Briefing,… She Needs To Share That Evidence”

Later on Monday, DNI John Ratcliffe posted a statement regarding the “impact of unauthorized disclosures on force protection”:

Here is video of The Five discussing the credibility of NYT’s report:

Doocy To Biden: ‘Why Are You Trying So Hard In Your First Year To Pull The Country So Far To The Left?’