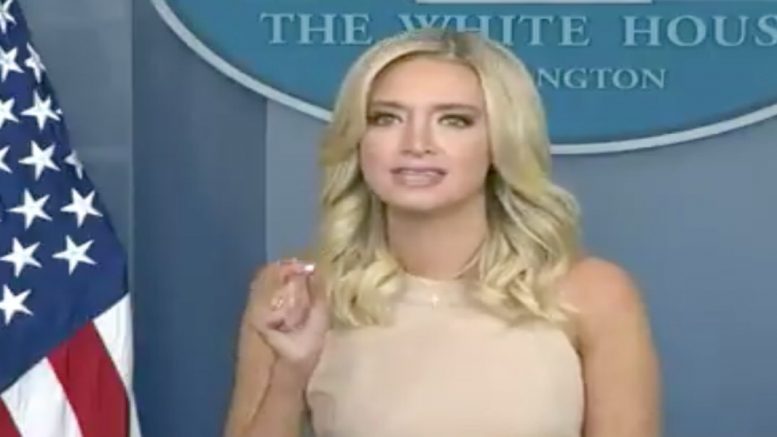 The New York Times, citing two officials familiar, reported Monday that the Russian bounty intelligence had been included in a February PDB given to the president. The Times was the first to report that a Russian military unit offered to pay Taliban-linked militants to kill coalition forces in Afghanistan, including American troops, citing officials briefed on the matter, reported Fox News.

“Who’s going to want to cooperate with the United States intelligence community? Who’s going to want to be a source or an asset, if they know that their identity could be disclosed? Which allies will want to share information with us if they know that some rogue intelligence officer can go splash that information on the front page of a major U.S. newspaper?” she asked.

McEnany continued: “Specifically, there are two bad scenarios that emerge from this report: Number one, this report makes it more difficult to come to a consensus on this matter, to verify intelligence.  And number two, this level of controversy and discord plays directly into the hands of Russia and, unfortunately, serves their interests.”

“Since before President Trump assumed office, damaging and oftentimes erroneous leaks seeking to undermine or delegitimize the duly elected president have been published. According to the DOJ, classified leaks surged in this administration. There were, under President Obama, just 39, on average, criminal leak referrals. In this administration, we’ve seen 100 criminal leak referrals to the DOJ in 2017, 88 in 2018, and 104 on average per year,” she told reporters. Continued Below

The press secretary continued: “We have seen targeted leaks of classified information against this President, and it is irresponsible: phone calls with foreign leaders, meetings with government officials, and now reports of alleged intelligence. Make no mistake: This damages our ability, as a nation, to collect intelligence.”

“As the National Security Council noted just yesterday, ‘To those government officials who betray the trust of the people of the United States by leaking classified information, your actions endanger our national security,'” she said.

McEnany went on to say of the leaks: “The ODNI said, ‘The selective leaking of any classified information disrupts the vital interagency work to collect, assess, and mitigate threats, and places our forces at risk.  It is also, simply put, a crime.'” Video Below

“And finally, the CIA said this: that ‘Leaks compromise and disrupt the critical interagency work to collect, assess, and ascribe culpability,'” the press secretary noted.

.@PressSec: "The front page of the "New York Times" is not the venue for discussing classified information." pic.twitter.com/fSABsMuNpK

McEnany also asserted Tuesday that President Trump is the “most informed person on planet Earth” about the threats the United States faces.

She was asked by a reporter why the president doesn’t read his President’s Daily Brief (PDB), a document produced each day for the president containing the government’s latest secrets regarding national security.

“The president does read,” McEnany fired back. “The president is the most informed person on planet Earth when it comes to the threats that we face.”

Press Sec. Kayleigh McEnany: "This President is the most informed person on planet Earth when it comes to the threats that we face." pic.twitter.com/VXgCYbXvIl

What a quote from WH Press Secretary Kayleigh McEnany: "The president does read…The president is the most informed person on planet Earth when it comes to the threats that we face."

.@PressSec adds that the President is the most informed person “on planet Earth” when it comes to threats against the U.S. https://t.co/c9tXtruWEQ

"The president does read … This is the most informed person on planet earth when it comes to threats that we face."

NOW: @PressSec says @realDonaldTrump "This president is the most informed person on planet earth." pic.twitter.com/sUdOpk8AAL