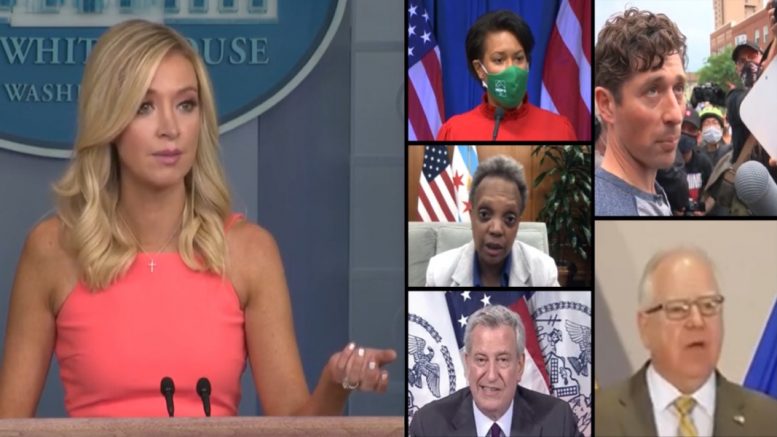 White House Press Secretary Kayleigh McEnany stepped to the podium Monday, briefing reporters after President Donald Trump and the Department of Justice have taken measures to crack down on law and order following unrest that has erupted across the nation after the death of George Floyd.

“Law and order are the building blocks to the American dream, but if anarchy prevails, this dream comes crumbling down,” McEnany told reporters.

“Anarchy in our streets is unacceptable and anger is not enough. You have a president who is committed to action,” the press secretary said.

McEnany explained during the briefing that the Department of Justice “has arrested over 100 anarchists for rioting and destruction of federal property. The DOJ has has charged 4 men in federal court for attempting to tear down the statue of Andrew Jackson in Layfette Square.”

“The United States Attorney’s Office for the District of Columbia will not stand idly by and allow our national monuments to be vandalized and destroyed.  This Office remains steadfast in its commitment to protect the sacred First Amendment right of individuals to peacefully protest, but these charges should serve as a warning to those who choose to desecrate the statues and monuments that adorn our nation’s capital:  your violent behavior and criminal conduct will not be tolerated,” said Acting U.S. Attorney Michael R. Sherwin. Continued Below

Craig Carpenito, the U.S. attorney for New Jersey, and Erin Nealy Cox, the U.S. attorney for the Northern District of Texas, will head the task force, which will also include representatives from the FBI and other prosecutors’ offices. The task force’s mission will be to develop information about “extremist individuals, networks, and movements,” share data with local authorities and provide training to local prosecutors on how to wage cases against anti-government extremists, The Hill reported.

“The ultimate goal of the task force will be not only to enable prosecutions of extremists who engage in violence, but to understand these groups well enough that we can stop such violence before it occurs and ultimately eliminate it as a threat to public safety and the rule of law,” Barr wrote in a memo. Continued Below

McEnany went on to say: “With 200 Trump-appointed judges confirmed, the rule of law will be upheld.  Democrats at all levels, federal, state, and local, have done nothing. Senate Democrats blocked bipartisan police reform. Minnesota’s Democrat governor failed to urgently deploy the National Guard– it took President Trump for that to eventually happen; his suggestion– and the ultimate descendance into chaos there in Minneapolis.”

She noted that three Democrat Minneapolis council members voted to abolish the police while “they themselves were getting a private security detail. That’s quite rich.”

Several Minneapolis City Council members who have received death threats following their calls to defund the police after the death of George Floyd have been assigned private security details — reportedly costing the city $4,500 a day in taxpayer dollars. The city has spent $63,000 on private security over the last three weeks, Fox News reported.

“Democrat mayor of Seattle called the CHOP zone– the autonomous zone — “the summer of love.” It is anything but that with one dead, multiple shootings, and desperate pleas for help unanswered by business owners and others,” the press secretary reported. Video Below

“President Trump stands against defunding our brave police officers, caving to mob rule, and cancel culture which seeks to erase our history,” she stated. “Let’s be clear: The rampant destruction of statues is not a part of any ideology, but this anarchy is aided by failed Democrat leadership.”

“And as President Trump has tweeted, these statues, ‘are great works of art, but all represent our History & Heritage, both the good and the bad–it is important for us to understand and remember, even in turbulent and difficult times, and to learn from them,'” she noted of his tweet.

“So let’s stand for law and order, for peace in our streets, and against anarchy. This is President Trump’s vision for the future,” McEnany added.

.@PressSec: "This Anarchy is aided by failed Democrat Leadership" pic.twitter.com/31elqrvgHW

NEW: AG Barr has created task force on violent anti-government extremists, to be led by @USAO_NJ and @USAttyNealyCox.

“Some pretend to profess a message of freedom and progress, but they are in fact forces of anarchy, destruction, and coercion.” pic.twitter.com/bfyB9Sacmn

“The complaint, unsealed today, alleges that on June 22, 2020, the four men along with other unidentified individuals, damaged and attempted to tear down the statue depicting Andrew Jackson located in Lafayette Square.” https://t.co/iZdRIAfugA

⏹ 100+ arrests and charged cases under a # of fed laws, including inciting riots and destruction of federal property.

(Related: Bongino On Those Who Have Committed Crimes While Protesting: “Perp Walk Every Single One Of Them”)