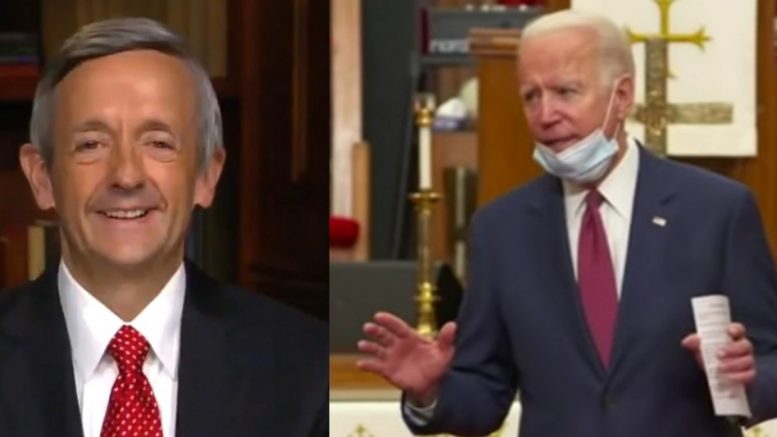 Evangelical Christians will turn out in greater numbers for President Trump in the 2020 election compared to 2016, according to Pastor Robert Jeffress.

The pastor made the bold predicition while weighing in on new reports that suggest former Vice President Joe Biden is gaining support among evangelicals.

“Joe Biden doesn’t have a prayer of a chance of attracting any substantial evangelical support,” Pastor Jeffress told Lou Dobbs as he asserted that “Joe Biden has been bought and paid for by Planned Parenthood.”

“He is a prisoner to their agenda. And that agenda includes abortion up until a child is born, or if you follow that wacko Ralph Northam in Virginia, even after the child is born,” he continued. “And there is no way any true Christian or any American with a semblance of a conscious can vote to support somebody like Joe Biden who supports that barbaric agenda.”

Jeffress admits that there has been “a little “softening” of evangelical support for President Trump. However, he believes “that’s only temporary.”

“When evangelicals begin focusing on this election after Labor Day, and they compare President Trump’s solid accomplishments and the pro-life, pro-religious liberty, pro-Israel, pro-conservative judiciary arenas — when they compare that to Joe Biden’s absolute commitment to undo every one of those accomplishments, I predict evangelicals will turn out by even greater numbers for President Trump then they did in 2016,” Pastor Jeffress declared. Video Below

AZ Sen. Rogers Ramps Up Pressure on AG Brnovich: ‘Arrest Those Who Stole Our Elections & Deleted the Election Data’