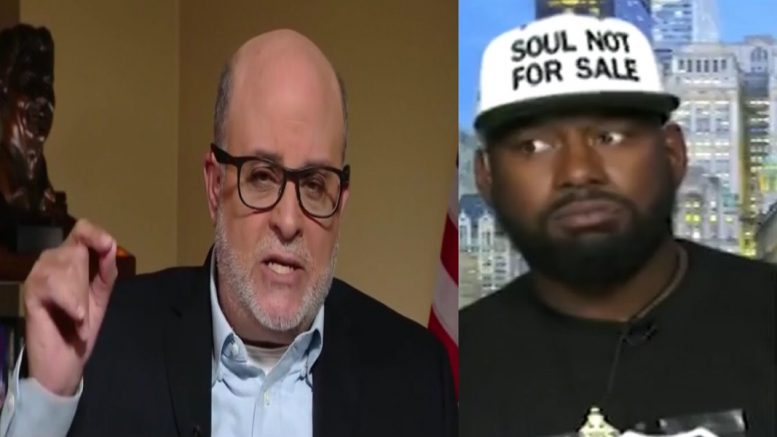 Wednesday on Fox News’ “Hannity”, Mark Levin fired off, aimed at a top activist in the Black Lives Matter movement who had admitted to Martha McCallum on live TV that “if this country doesn’t give us what we want, then we will burn down this system and replace it.”

The New York Black Lives Matter leader, Hawk Newsome, told MacCallum that his “burn down this system” statement could be taken “figuratively” or “literally,” adding, “it’s a matter of interpretation.”

Hawk Newsome: “We will burn down this system and replace it”.

Mark Levin, however, fired back at Hawk Newsome asking: “You’re gonna burn what down, pal? “I’m sick and tired of these d–n threats from people I don’t even know.”

“You’re gonna burn what down?” Levin wondered. “What exactly are you gonna burn down, tough guy? I’m sick and d–n tired of it.”

“It’s time to get behind the cops. It’s time for these pathetic Democrat mayors and governors to call in the National Guard,” he told Sean Hannity. “It’s time to take our streets back, and I’m talking for tens of millions of people, a rainbow coalition of Americans — black, brown, white, yellow, red, whatever.” Video Below

“This is a civil society,” Mark Levin continued. “It’s a great country. You don’t like it? Pick up your a– and leave. We have people trying to get into this country by the millions, from every continent on the face of the earth. Every color, every background. Why? Because we’re systemically racist? We’re not systemically racist and the police force isn’t systemically racist.”

“Now, these are Bernie Sanders radicals,” he suggested. “These are Marxists. They go out and get hats, and they get shirts, and they burn things down and break things in Democrat cities because these pathetic left-wing Democrat mayors won’t stand up to them. It’s all happening in Democratic cities.

President "Trump not only needs to not be in office in November but he should resign now," says co-founder of the Black Lives Matter Global Network Patrisse Cullors. "Trump needs to be out of office. He is not fit for office." pic.twitter.com/T6mLZ11cEv

(Related: Man Who Got Shot In CHAZ Hints At Legal Action Against Police: “Cops Left Me Out There To Die”)