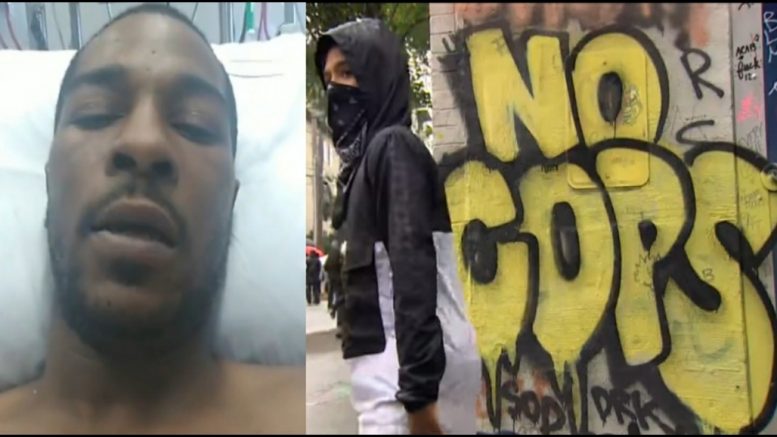 A man who apparently got shot in CHOP/CHAZ posted a video on TikTok asking for legal and public assistance.

The man was likely a victim in a shooting that took place on Friday in Seattle’s autonomous zone, where CHAZ protesters reportedly allowed entry to firefighters, but blocked Seattle police officers from responding after one person was killed and one was seriously wounded in a gun fight.

The crowd rushed the surviving victim to get medical treatment, where he was immediately placed in intensive care, according to National Review.

The survivor has since claimed that the Seattle police “left him out to there die” in a selfie video that he took from his hospital bed, where he asked for help to get his story out.

“I was shot in Seattle, in CHAZ, on Friday. The cops left me out there to die,” the man says.

“I need help with somebody in legal or the media to get my story told, and get it out there,” he added. “I got shot five times–I need you guys’ help.” Video Below

A man who got shot in CHAZ now wants to sue the police for not responding fast enough to the "autonomous zone" where they have up barricades barring the police from entering.https://t.co/6udR8zekik

Related Article: President Trump Mocks CHAZ Protesters Over Their ‘Wall’: “See, I Was Ahead Of Our Times”

The plea from the shooting victim makes for quite the ironic twist, since CHAZ was initially set up as a “police-free zone” by protesters who are calling for the defunding and dismantling of the men in blue. Continued Below

In ending, here is video of a resident living inside CHAZ, explaining just how “evil” and violent conditions have become in the autonomous zone, and how she would be better off “in a homeless shelter right now.”

Seattle residents living inside of #CHAZ are terrified for their safety, but Democrat leaders refuse to take action.

“These people are evil at night… I’d go almost to a homeless shelter right now… to be away from the violence.”

President Trump is right, we need law and order! pic.twitter.com/1BZmVgoBGA

President Trump Mocks CHAZ Protesters Over Their ‘Wall’: “See, I Was Ahead Of Our Times”