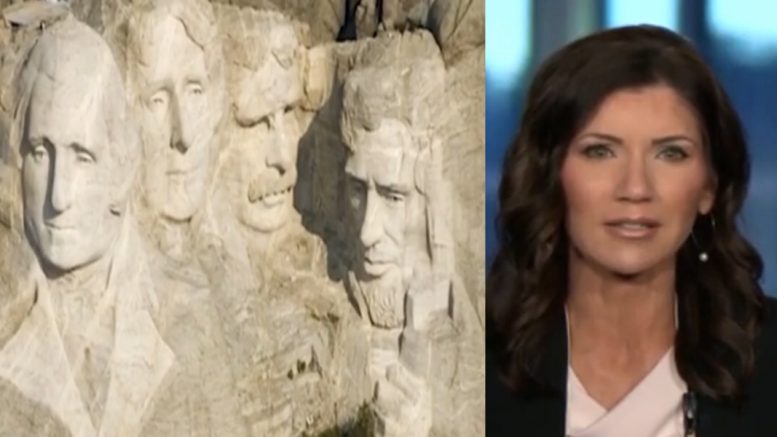 As previously reported by The Freedom Times, President Donald Trump said that he plans to attend a fireworks show at Mount Rushmore in South Dakota on July 3, after his administration lifted environmental restrictions that prevented such displays.

South Dakota Republican Governor Kristi Noem praised the Commander in Chief for making it possible, as there have not been fireworks at the historic monument since 2009.

However, Mount Rushmore is reportedly drawing sharp criticism from Native Americans who view the monument as a desecration of land violently stolen from them and used to pay homage to leaders hostile to native people.

Several groups led by Native American activists are planning protests for Trump’s July 3 visit. Many Native Americans activists say the Rushmore memorial is as reprehensible as the many Confederate monuments being toppled around the nation, reported Fox News.

“Mount Rushmore is a symbol of white supremacy, of structural racism that’s still alive and well in society today,” said Nick Tilsen, a member of the Oglala Lakota tribe and the president of a local activist organization called NDN Collective. “It’s an injustice to actively steal Indigenous people’s land then carve the white faces of the conquerors who committed genocide.”

The four faces, carved into the mountain with dynamite and drills, are known as the “shrine to democracy.” The presidents were chosen by sculptor Gutzon Borglum for their leadership during four phases of American development: Washington led the birth of the nation; Jefferson sparked its westward expansion; Lincoln preserved the union and emancipated slaves; Roosevelt championed industrial innovation, per Fox News. Continued Below

“My message is this is no longer about equality, this is a radical rewriting of our history. And in South Dakota, we won’t stand for it. This is a national monument. The more we focus on the flaws of these men that are on our mountain, the less likely we are to recognize virtues and the lessons we can learn from their lives,” Governor Noem said.

“We will do all that we can to make sure that message is loud and clear– that we will make sure that Mount Rushmore stays at majestic as it is today,” she explained. Video Below

Asked how she will plan on stopping protesters if they try to harm Mount Rushmore, Governor Noem replied: “You know this is obviously a federal mountain, it is a national monument. It is something we will partner with them and use the resources of the state to make sure we have security measures in place. … We do have actions together that we’re working on”.

“We know that this threat to the mountain could remain in place for quite some time, and we are prepared to be there and be diligent in protecting it,” she added.

On Tuesday, Governor Kristi Noem tweeted: “Not on my watch”, over the possibility of Mount Rushmore being destroyed.