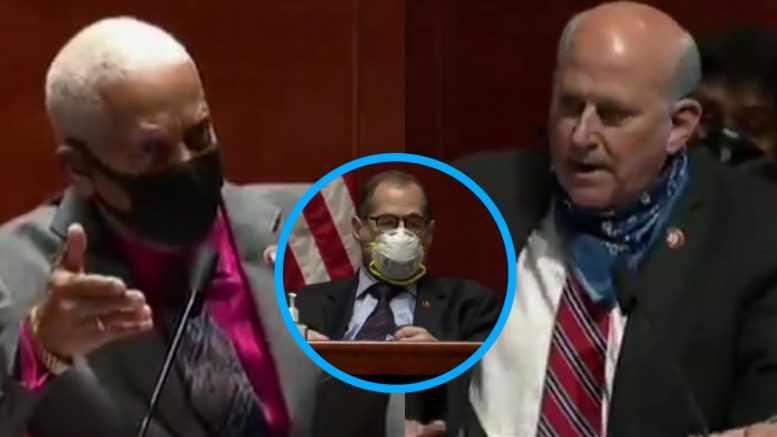 The House Judiciary Committee’s hearing was thrown into disarray on Wednesday as Rep. Hank Johnson called on the sergeant-at-arms to stop Congressman Louie Gohmert’s “disruption.”

The situation unfolded when Gohmert interrupted a statement given by former deputy attorney general Donald Ayer by continually banging on his desk.

Gohmert was appalled that Ayer went over the five minutes he was allotted to deliver his opening statement, which included calling Barr a liar who is “using a criminal investigation to produce fodder for the President’s campaign propoganda mill.”

“We’re well beyond regular order,” Goehmert said after continually tapping on his desk to get Chairman Jerry Nadler’s attention.

As Gohmert continued the tapping noise, Rep. Johnson said, “Mr. Chairman, I would ask that the sergeant-at-arms be called upon to stop the disruption of this meeting.”

“I can’t hear this witness, this is a very important witness,” Johnson added. Continued Below

Related Article: Gohmert Counter-Strikes After Nadler Accuses Him Of Spouting Off Russian Propaganda: “Have His Words Taken Down”

The tentious moment sparked a committee debate  over the rules, as Goehmert continued banging his desk. Video Below

Reps. Nadler & Johnson fail to get Gohmert to stop. Johnson asks if sergeant-at-arms could be brought in.

Ari Fleischer On COVID-19 Briefings: “Don’t Give Them A Fight, Rise Above” , Hannity Blasts CNN’s Lack Of Coverage