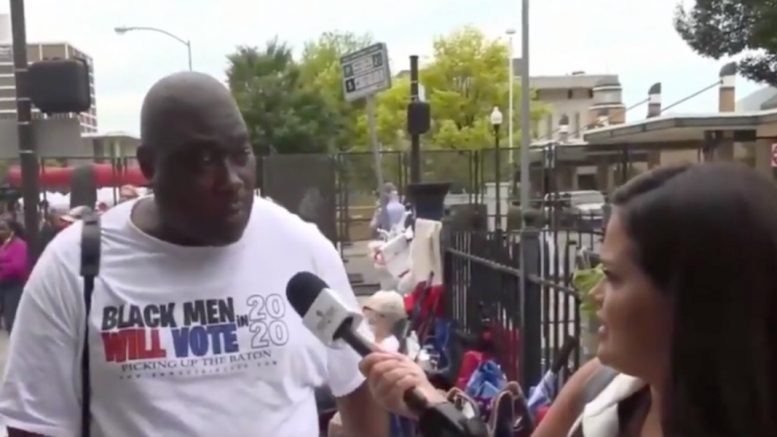 A black Trump supporter attending the Tulsa Trump rally on Saturday, told an RSBN reporter that CNN made him appear as if he was part of “unrest” occurring ahead of the rally.

“Someone sent me this clip from CNN [which aired] sometime this morning, saying the ‘unrest’ is here. I’ve been here for 5 days– I don’t know what it means,” the man said.

The trump supporter told the RSBN reporter: “The news is saying there is so much unrest in Tulsa and it’s just the opposite. It’s been calm all over the city, and we’ve been all across the city”.

He proceed to show the reporter a picture captured from CNN, which showed a picture of himself, along with a chyron below that read: “Tulsa braces for clashes; COVID-19 risk at Trump rally”.

The RSBN reporter read the chyron aloud and expressed, “Wow! And look at the photo they got of you. Let’s get the camera on that. That is not ethical journalism. I mean, they just have you looking angry– like you want to riot. How did that make you feel when you saw that?”

“Hey, man. It’s the media,” the Trump supporter said. “I mean, you have to get up and know who you are. And so, I’ve turned them down maybe 7 times for interviews. Maybe it was a chance to take a shot at me.” Video Below

Meanwhile, video was captured on Friday, in the line at the Trump rally, of a black Trump supporter being called a “house n***r”:

Epic moment from the line at the Trump rally…

(Related: Woman Wearing ‘I Can’t Breath’ Shirt Gets Arrested For Trespassing & Carried Out Of Rally Area In Tulsa)