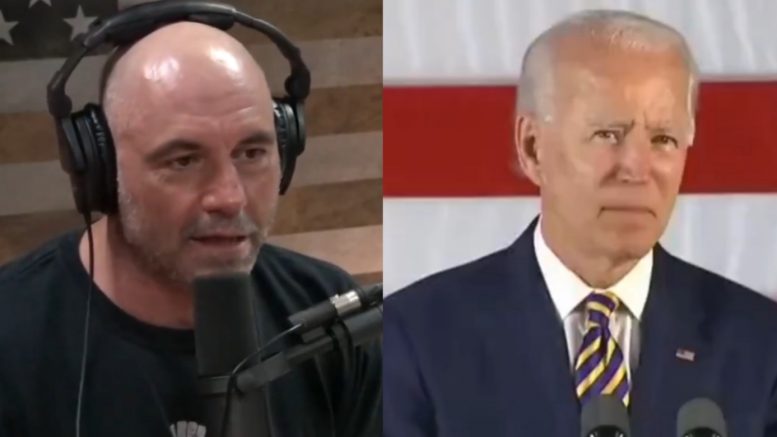 Joe Rogan called out the media for ignoring Biden speeches that “clearly show some sort of cognitive decline.”

Rogan made the assessment during one of his latest podcasts.

“The news media on the left has completely ignored all of these Biden speeches that clearly show some sort of cognitive decline,” Rogan said.

Rogan went on to say that he finds it hard to agree with notion made another political pundit David Pakman who defended Biden by saying such moments “didn’t show his decline.”

“I was trying to look at it in a way that made sense. I was trying to be rational about it,” Rogan said. “I’m like, ‘Maybe he’s just exhausted or maybe this or maybe it’s just pressure. You know, sometimes people get really tongue-tied and really panic under pressure and words come out all f*cked up. That is possible.'”

“But there is a trend. And if you go back to when he was a younger man, that trend didn’t exist. You’re seeing a change,” he added.

Joe Rogan: "The news media … has completely ignored all of these Biden speeches that clearly show some kind of cognitive decline." #BarelyThereBiden –> https://t.co/Xrc3sEuTPk pic.twitter.com/rmp23BOBUr

In a new poll that was published on Wednesday, 55% of likely voters said they believe Biden could be in the early stages of dementia.

Alternate headline: 45% of Americans in denial over Biden’s dementia 👀

Biden has been known for having several gaffe’s and moments where he appears to lose his train of thought while campaigning, which has led to his critics speculating if he is suffering from early stages of dementia. Videos Below

We leave you with clips Biden’s most recent “brain freezes” and low-energy moments:

Looks like #SleepyJoe needs to take his own advice👀 pic.twitter.com/DZvoaITRyi