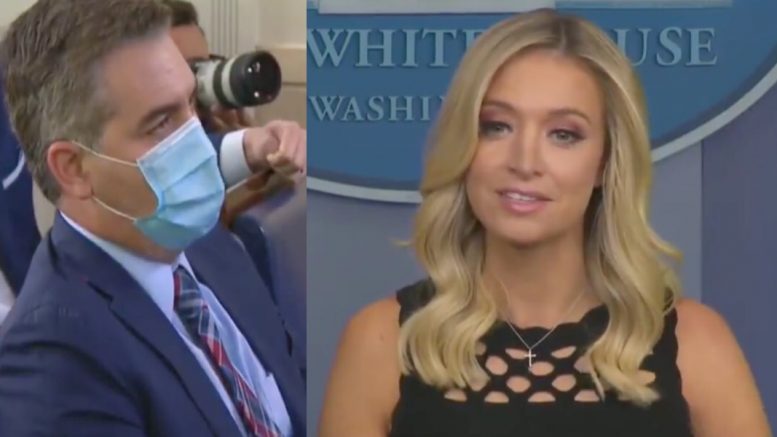 On Thursday evening, the president tweeted a clip of a black toddler and a white toddler, which was edited to include a CNN chyron reading “terrified todler [sic] runs from racist baby.”

The video also included edited background music and a sarcastic CNN headline. The video reverts to the original clip midway through, cutting to a title reading “America is not the problem. Fake news is.” Twitter ultimately labeled the video “manipulated media”.

During Friday’s briefing, Jim Acosta pressed Kayleigh McEnany over the president’s video tweet, that mocked the anti-Trump cable network for which he works for.

McEnany responded: “He was making a point about CNN, specifically. He was making a point that CNN has regularly taken him out of context– that in 2019, CNN misleading aired a clip from one view point repeatedly to falsely accuse the Covington boys about students being in MAGA gear harassing a Native American elder. That’s a harassing video, a misleading video about children that had really grave consequences for their future.” Continued Below

“So you’re saying it’s okay to exploit two toddlers hugging one another on a sidewalk to make some sort of political point? I mean, as you know, the president as described members of the press as fake news during the course of this administration. When you share fake videos like that, doesn’t that make you fake news?” Acosta tried again.

McEnany broke it down for Acosta: “I think the president was making a satirical point that was quite funny if you go and actually watch the video. … The point is, it was a play on CNN repeatedly taking the president out of context like the time when you guys had a chyron that read: Trump slams some illegal immigrants ‘They’re animals’. Well guess what? The people he called animals were MS-13 illegal immigrants, who regularly mutilate people in this country. Those things are entirely misleading.”

Acosta flustered, vented his frustration: “The president has referred to some Mexicans as rapists, he has tried to pass a Muslim ban in this country, he has described black NFL players as sons of b*tches, they take a knee during a football game.”

The press secretary fired back: “That’s an absurd attempt to justify the misleading headlines that are regularly on your network, like I was just walking in watching CNN as they lauded the ‘rallies in the streets'”, she noted before being interrupted. “You gotta let me finish Jim. This isn’t a cable news segment. I’m answering your question right now from the White House podium.” Video Below

“In a Trump rally where we celebrate historic African American unemployment, criminal justice reform, HCBU’s, that rally is not allowed because guess what, Jim? It doesn’t fit the ideological agenda of CNN,” McEnany added.

.@PressSec TORCHES @Acosta after he repeatedly asks questions because he can’t comprehend a meme.

CNN regularly twists the facts and puts misleading headlines on their network.

That was the point of the meme.. pic.twitter.com/IAjtkL2XDS

(Related: Acosta Questions Why Trump Would Hold A Rally Despite CDC Guidelines, McEnany Schools Him)