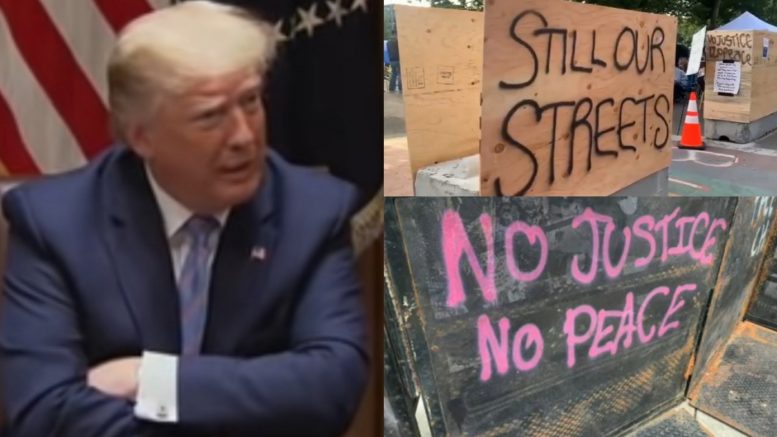 President Trump mocked CHAZ (aka CHOP) protesters on Thursday, when he targeted barriers that were erected soon after they took control of a six-block area in Seattle.

After the East Precinct police headquarters in Seattle was vacated, Seattle protesters created a police-free neighborhood, where they initially sealed off the area with roadblocks, wooden barriers, makeshift tents and whatever else they could find to create a border.

Just days later, the City of Seattle reached an agreement with CHAZ leadership to replace all temporary roadblocks with several concrete barriers, which reduced the occupied area from six blocks to three.

In reaction to the concrete “wall” that now protects the CHAZ neighborhood, President Trump sarcasically suggested that he was “ahead of our times.”

“First thing the anarchists did upon taking over Seattle was ‘BUILD A WALL,'” Trump tweeted. “See, I was ahead of our times!” Video Below

As of the mid-April, 156 miles of new primary and secondary border wall have been built since January 2017, according to Fox News.

Democrats and leftists have been highly critical of Trump’s wall, which makes it that much more ironic that radical leftist protesters have chosen a barrier as a source of protection from the outside world.

Here is a clip video of Trump reacting to the CHAZ/CHOP situation in Seattle:

In ending, we leave you with video footage showing the “wall” getting constructed around the CHAZ zone:

Sen. Graham Indicates Why It’s Acceptable For Trump To Call COVID-19 The ‘Chinese Virus’: “It Came From China”