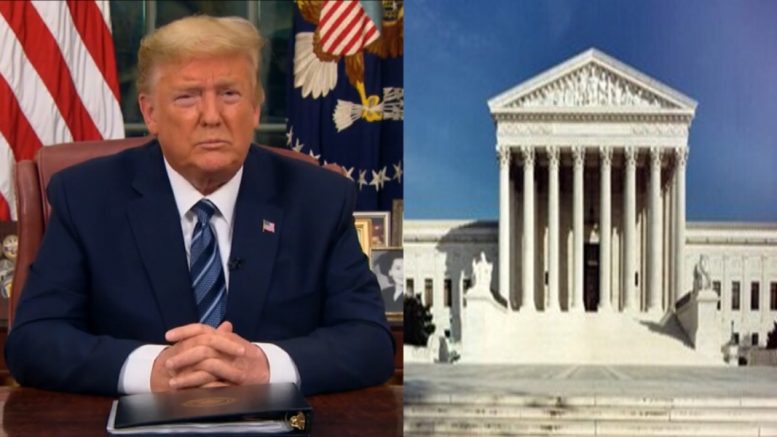 In the wake of a 5-4 Supreme Court decision that ruled against President Trump’s efforts to end the Deferred Action for Childhood Arrivals program (DACA), the Commander in Chief took to Twitter Thursday, blasting the “horrible & politically charged decisions” coming from the high court, calling them “shotgun blasts into the face” of conservatives. He also announced he “will be releasing a new list of Conservative Supreme Court Justice nominees”.

The court ruled Thursday that Trump’s reversal of President Obama’s executive order –­ that shielded illegal immigrants who came to the country as children from deportation –­ was in violation of the Administrative Procedure Act (APA), which sets out rulemaking procedures for federal agencies, Fox News reported.

Earlier in the week, the Court ruled in a 6-3 decision that an employer who fires a worker for being gay or transgender violates Title VII of the Civil RIghts Act, with Justice Neil Gorsuch writing the majority opinion. Together the decisions riled both social conservatives and immigration hawks on the right, per Fox News.

The court decisions are politically perilous for Trump, who has touted his Supreme Court picks as a top achievement of his first term. While both Gorsuch and Justice Brett Kavanaugh, Trump’s two Supreme Court nominees, voted in dissent to the DACA ruling, Gorsuch’s siding with the majority on Monday infuriated many conservatives and reinforced a perception that liberals on the court stick together while conservative justices end up peeling off, according to Fox News.

“These horrible & politically charged decisions coming out of the Supreme Court are shotgun blasts into the face of people that are proud to call themselves Republicans or Conservatives,” he expressed. “We need more Justices or we will lose our 2nd. Amendment & everything else. Vote Trump 2020!”

President Trump wondered: “Do you get the impression that the Supreme Court doesn’t like me?” Continued Below

“The recent Supreme Court decisions, not only on DACA, Sanctuary Cities, Census, and others, tell you only one thing, we need NEW JUSTICES of the Supreme Court. If the Radical Left Democrats assume power, your Second Amendment, Right to Life, Secure Borders, and Religious Liberty, among many other things, are OVER and GONE!” he warned.

“The DACA decision, while a highly political one, and seemingly not based on the law, gives the President of the United States far more power than EVER anticipated. Nevertheless, I will only act in the best interests of the United States of America!” the Commander in Chief exclaimed.

“As President of the United States, I am asking for a legal solution on DACA, not a political one, consistent with the rule of law. The Supreme Court is not willing to give us one, so now we have to start this process all over again,” the president said. Continued Below

“I will be releasing a new list of Conservative Supreme Court Justice nominees, which may include some, or many of those already on the list, by September 1, 2020. If given the opportunity, I will only choose from this list, as in the past, a Conservative Supreme Court Justice Based on decisions being rendered now, this list is more important than ever before (Second Amendment, Right to Life, Religous Liberty, etc.) – VOTE 2020!” he then announced.

“Eight years ago this week, we protected young people who were raised as part of our American family from deportation,” Obama tweeted.“Today, I’m happy for them, their families, and all of us.”

“We may look different and come from everywhere, but what makes us American are our shared ideals and now to stand up for those ideals, we have to move forward and elect @JoeBiden and a Democratic Congress that does its job, protects DREAMers, and finally creates a system that’s truly worthy of this nation of immigrants once and for all,” he added. Continued Below

In his dissent in the SCOTUS DACA case Justice Thomas says The decision is “An effort to avoid a politically controversial but legally correct decision.” pic.twitter.com/kFvWt4f2BH

…and now to stand up for those ideals, we have to move forward and elect @JoeBiden and a Democratic Congress that does its job, protects DREAMers, and finally creates a system that’s truly worthy of this nation of immigrants once and for all.