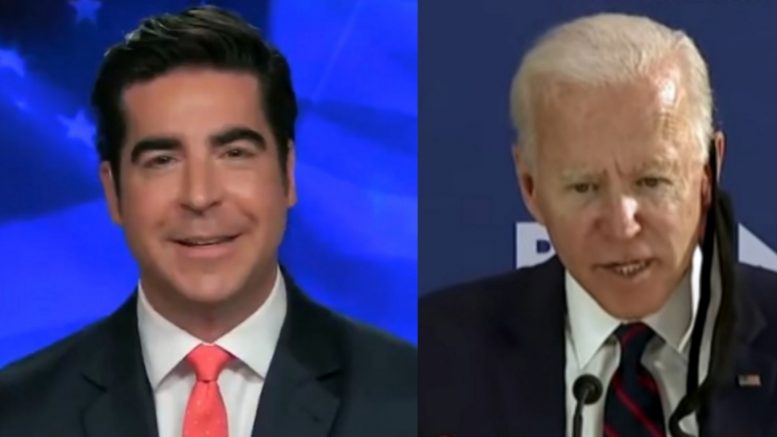 During a recent airing of The Five, Jesse Watters broke down why he feels things will only get “worse” for presumptive Democratic nominee Joe Biden as things return back to normal for Americans after months of following CDC guidelines regarding the coronavirus.

Watters suggested that in the meantime, the DNC has been “hidin’ Biden in the basement,” while referencing a “rigged CNN poll” that shows Biden well ahead of President Trump at this point.

Watters said, “I’ll be perfectly honest. You had a quarter where you had the Chinese Virus, which was very deadly. You had racial bias. You had a snap recession, so it’s been a challenging second quarter for this Republican president in an election year, especially when 95% of the media is negative.”

“With that said, the more things return to normal, which they will, the worse it is for Joe Biden,” he declared.

“And we all know he’s not the most talented guy,” he asserted. “He was kind of the default pick in the primary. Everybody else just kind of lost. So they said, ‘OK, we’ll go with Joe’ — not a good fundraiser, not a good debater, not that great of a campaigner.”

Jesse continued, “And, President Trump has been fighting Joe Biden with one hand tied behind his back. Once this stops, and he can go out and hold a rally, things change. These rallies are kinda like the lifeblood for the president — they get the base energized, they can pull out all the data from all these people there. You know, you buy 50,000 MAGA masks, you strap them on, you do two hours at a deep-red state.”

“Things will get back to normal. And do I look worried? Not yet,” Watters concluded. Video Below

"The more things return to normal, the worse it is for Joe Biden" #TheFive pic.twitter.com/0smKjuwL4E