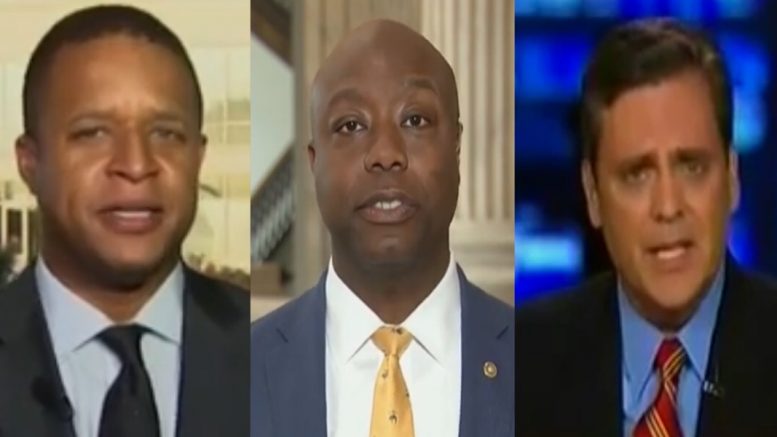 Jonathan Turley, a law professor at George Washington University, criminal defense attorney, and legal analyst, reacted after NBC News anchor Craig Melvin asked Senator Tim Scott (R-SC) if the GOP is “using” him as a “token” amid the response to George Floyd’s death.

Scott has been leading the effort in the Senate among Republican lawmakers in pursuit of police reform. However, the “Today” host questioned whether Scott’s party was maximizing the only black GOP senator to its advantage, Fox News reported.

“You have faced a fair amount of criticism, especially over the past few days, because you are the only black Republican senator,” Melvin said during the Thursday interview. “Some have said that your party is using you, they’ve even thrown around the word ‘token,’ as well. Your response to that criticism?”

He continued: “So if there’s someone in the conference who understands discrimination and profiling, it’s me. It’s the reason why I asked to lead this charge, because it is a personal issue, it is the right issue. And frankly, I think it helps to have someone who’s been a victim of this situation and who still has a tremendous respect for where our country can go together.”

“So I shrug those comments and criticisms off. But you’ve got to know, when you’re a black Republican, you’re like a unicorn. People are going to criticize you when you wake up, when you go to sleep, if you say you like apple pie and football, there’s a lot of critics for that, too. So God bless their souls,” Senator Scott expressed. Continued Below

“NBC anchor Craig Melvin asked Sen. Tim Scott, R-S.C., if the GOP is ‘using’ him as a ‘token.’ It is the latest addition to the collection of questions only to be asked of Republicans. Imagine the response if that question was asked of Booker or Harris Melvin prefaced his question with ‘because you are the only black Republican senator,'” Turley tweeted.

“Note there are only two black Democratic senators. Yet, the conservative of the three is the one who is grilled over whether he is a ‘token,’ rather than a legitimate leader in his own right,” the law professor pointed out. Video Below

Craig Melvin’s question to Senator Tim Scott begins at 1:47 into the video:

…Melvin prefaced his question with "because you are the only black Republican senator." Note there are only two black Democratic senators. Yet, the conservative of the three is the one who is grilled over whether he is a "token," rather than a legitimate leader in his own right

Senator Tim Scott also tweeted on Wednesday, combating the idea that he was “being used” as a “token.”

“Not surprising the last 24 hours have seen a lot of ‘token’ ‘boy’ or ‘you’re being used’ in my mentions. Let me get this straight… you DON’T want the person who has faced racial profiling by police, been pulled over dozens of times, or been speaking out for YEARS drafting this?” Scott wrote on Wednesday.

He added, “And don’t throw ‘you’re the only black guy they know’ at me either. There are only two black Democratic Senators, stop pretending there’s some huge racial diversity gap in the Senate. Ask my Dem colleagues what their staffs look like… I guarantee you won’t like the answer.”

(Related: Biden: “If You Have A Problem Figuring Out Whether You’re For Me Or Trump, Then You Ain’t Black”, Scott & Pierson React)

Lara Trump Exhibits Interest When Asked If She Will Run For NC’s Senate Seat: “It Would Be Something Incredible”