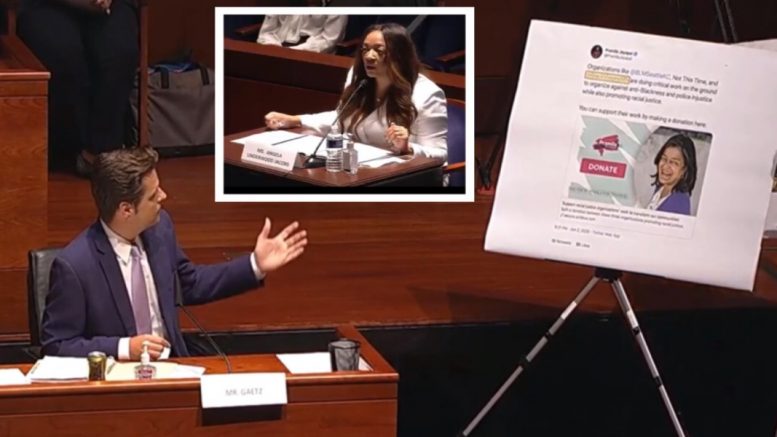 During Wednesday’s House Judiciary Committee hearing on proposed changes to police practices, Angela Underwood Jacobs, the sister of a federal protective officer in Oakland, who was fatally shot during a protest for George Floyd that turned violent, told lawmakers that calls to defund the police are “ridiculous”.

Jacobs’ brother, Patrick Underwood, was stationed in front of the U.S. Courthouse in Oakland Calif., on May 29 when a vehicle pulled up the building and opened fire at him and another contract security officer who both worked for Homeland Security’s Federal Protective Service. Underwood was killed while the second officer was wounded, reported Fox News.

“It is a ridiculous solution to proclaim that defunding police departments is the solution to police brutality and discrimination because it’s not a solution. It gets us nowhere as a nation and removes the safety net protection that every citizen deserves from their communities elected officials,” Angela Underwood Jacobs said in opening statement.

Rep. Matt Gaetz (R-FL), during Wednesday’s hearing, asked all all of the witnesses if they agreed with “defunding the police” and asked for a show of hands. Nobody raised their hand. “I didn’t see anyone raise their hands,” he announced for the record.

The Florida Congressman proceeded to display tweets from his Democratic colleagues who are in support of defunding the police. One of the tweets shown, was from a group that is raising money to end the police. Another tweet called to abolish the police. Further, Gaetz displayed a tweet that called for therapists, doctors, and street medics, instead of law enforcement.

He showed another tweet from an organization that members of Congress support and who are raising money for. The tweet read: “It’s not enough to only abolish police or prisons. We need to abolish race, abolish ICE, the military, abolish the State, abolish the borders”. Video Below

“And again, this is what our colleagues are raising money for. It’s not just any member of Congress, it’s actually one of our treasured colleagues on the Judiciary Committee, the gentle lady from Washington, raising money for this very same organization,” Rep. Gaetz said, referring to Rep. Pramila Jayapal (D-WA).

Gaetz asked Angela Underwood Jacobs: “When you learn my colleagues in Congress are raising money for an organization that promotes defunding the police, destroying our borders, defunding our military, and taking apart the State altogether, how does that make you feel?”

“Actually, I find that conduct to be deplorable,” Jacobs expressed. “And we elect officials to represent everyone. And the idea to have our communities without protection and safety is wrong. My response to that would be for people to get out and vote and get the right person in office to ensure that we feel protected, and our children feel protected for generations to come.”

(Related: At Hearing, Rep. Jordan Condemns Dems Who ‘Won’t Speak Out Against’ Defunding The Police)