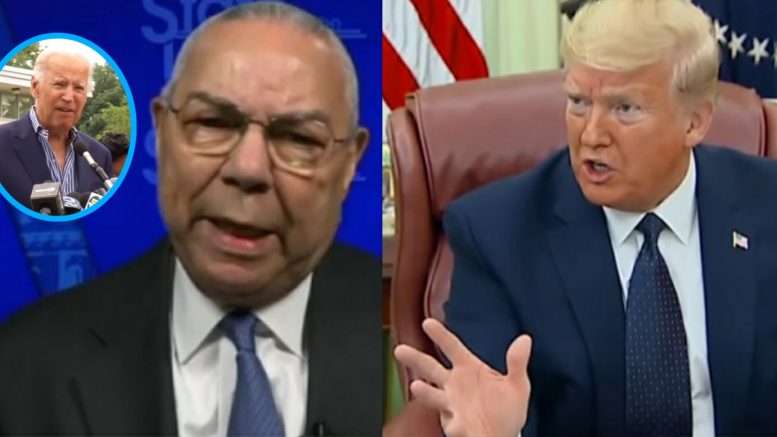 On Sunday, former Secretary of State Colin Powell revealed that he would be voting for former President Joe Biden in the 2020 election.

Powell made the announcement during his Sunday interview with CNN’s Jake Tapper on “State of the Union.”

“I’m very close to Joe Biden in a social matter and in a political matter,” Powell told Tapper. “I’ve worked with him for 35, 40 years. And he is now the candidate and I will be voting for him.”

Powell went on to say that he doesn’t plan on campaigning for Biden, even if he were asked to do so.

Soon after Powell made the announcement, President Trump took to Twitter, where he blasted the former Secretary of State.

Related Article: George Bush’s Spokesman Denies NYT’s Report That Bush Won’t Vote For Trump: “This Is Completely Made Up”

“Colin Powell, a real stiff who was very responsible for getting us into the disastrous Middle East Wars, just announced he will be voting for another stiff, Sleepy Joe Biden,” Trump tweeted.

“Didn’t Powell say that Iraq had “weapons of mass destruction?” They didn’t, but off we went to WAR!” he added. See Below

Prior to Powell’s announcement, The New York Times reported in an article that former President George W. Bush would not be supporting Trump in the 2020 election.

The claim by NYT, however, was debunked by Bush’s spokesman Freddy Ford, who called the story “completely made up.”