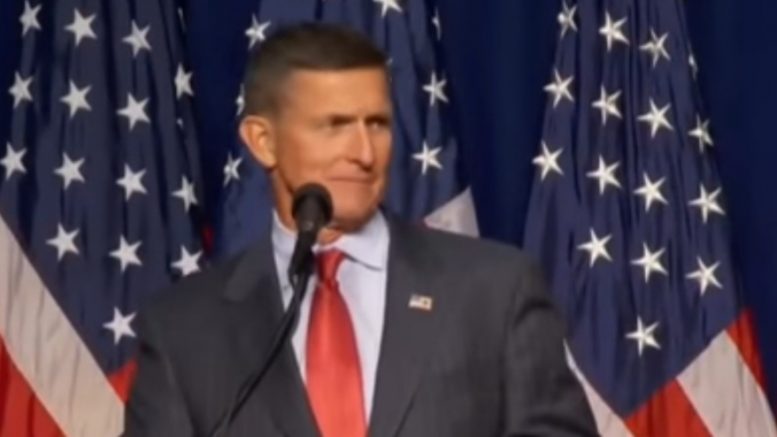 General Michael Flynn declared “I am not done” in a letter that was sent to documentary filmmaker and journalist Scott Kesterson.

The cryptic message is written at the conclusion of Flynn’s letter that was uploaded to Twitter on Thursday, which discusses how to prevent the U.S. from continuing to “slide into the abyss of socialism.”

Flynn, who has been wrapped in a legal battle to have the federal case against him thrown out, wrote the following message to Kesterton:

“If the United States wants to survive the onslaught of socialism, if we are to continue to enjoy self-government, to secure the God-given individual blessings of liberty for ourselves, for our families, then good Americans must accept that each has a moral obligation to participate in the political life of our country.

“The art and exercise of self-governance requires active participation.  Voting matters but it is only a part-time engagement of the American citizenry and doesn’t go far enough if we are to survive as a constitutional republic. I want to see more of our Veteran and Law Enforcement communities become involved in the political life of America. We are a participatory experiment in governing. Without a greater commitment,  we will continue our slide into the abyss of socialism.” Continued Below

“And we must not be intimidated by the smear campaign that will most certainly come with greater and more active participation. We will only keep America if we dedicate ourselves to freedom’s victory over the socialist monster by our good citizens accepting greater responsibility.

Investigative journalist Sara Carter was told by a friend of General Flynn that the letter “means that Lt. Gen. Flynn has not given up on the country and neither should you.”

Carter wrote, “The friend said it was in response to the growing unrest in the country and a warning that Americans need to be involved in the political process.”