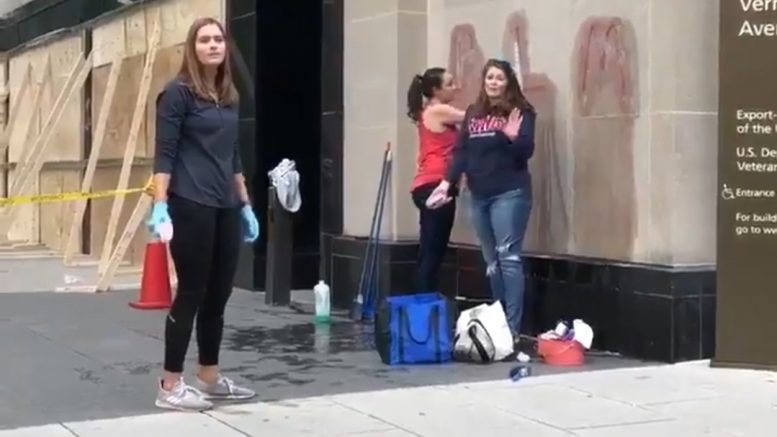 A video posted on Twitter appears to show a female driver bullying three samaritans who were cleaning up graffiti that placed on a federal building during riots.

As three women are seen scrubbing the spray-painted initials ‘BLM’ off of a building, a driver who is taking the video shouts, “Why are you guys removing Black Lives Matter graffiti?”

Related Article: Texas Homeless Veteran Tears Into Rioters After They Burn His Bed: “What The F— Are You Doing?!”

One of the women indicated that they tried taking off similar graffiti at another section of the building but “it wasn’t coming off”, unlike the area they were working on.

“But why would you want that to come off?” the woman in the car asked.

After one of the other samaritans explained that it was a federal building that had been vandalized, the driver followed up by saying, “So you don’t care about black lives then?”

“That’s not at all what we’re saying,” one of the women says back. “We certainly do care about black lives.”

“Not enough to leave up a message,” the driver responds, which then prompted one of the other cleaners to explain, “We don’t disagree with the message, ma’am. It’s just on the building. We’re just trying to clean it.”

“Right,” the driver responds. “Not a great way to use your white privilege, ladies. Not a great — that’s disgusting.” Video Below

Joe Biden: “Even Dr. King’s Assassination Did Not Have The Worldwide Impact That George Floyd’s Death Did”

Rapper Lord Jamar On The Black Lives Matter Movement: This Was “Given To Us By George Soros & His F—ing Boys” (Flashback)