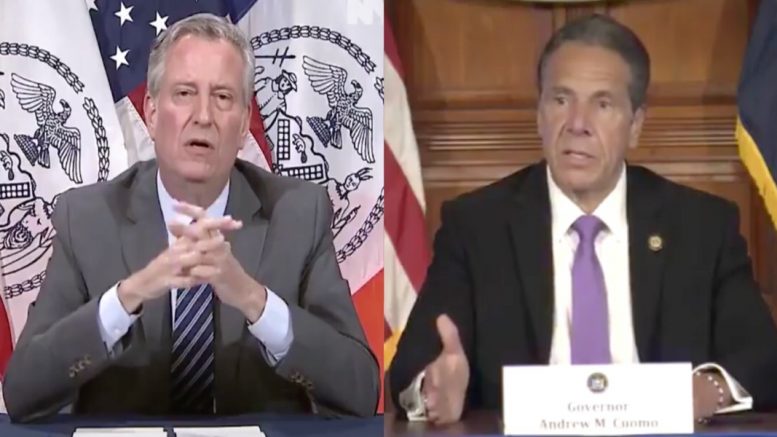 Democratic New York Governor Andrew Cuomo on Tuesday, slammed Democratic New York City Mayor Bill de Blasio’s handling of the riots that has occurred in his city after the death of George Floyd, calling it a “disgrace” and saying he has the power to “displace” the mayor.

“The NYPD and the mayor did not do their job last night, I believe that,” Cuomo said of de Blasio.

Governor Cuomo’s remarks came during a press conference Tuesday after another night of havoc in New York City, which devolved into riots and looting.

Fox News reported that the New York City Police Department made 700 arrests overnight, a half dozen police officers were injured, and at least six police vehicles were vandalized.

“You have 38,000 NYPD people, it is the largest police department in the United States of America,” Cuomo said. “Use 38,000 people and protect property. Use the police, protect property, and people. Look at the videos, it was a disgrace.”

In an extraordinary statement, he went on to say his “option is to displace the mayor … bring in the National Guard” and essentially “take over.” However, he said, “I don’t think we’re at that point,” adding: “That would be such a chaotic situation in the midst of an already chaotic situation. I don’t think that makes any sense,” per Fox News. Continued Below

Cuomo was responding, in part, to calls from President Trump for him to accept his offer of a “dominating National Guard.”

Earlier on Tuesday, President Trump took to Twitter to say: “Yesterday was a bad day for the Cuomo Brothers. New York was lost to the looters, thugs, Radical Left, and all others forms of Lowlife & Scum. The Governor refuses to accept my offer of a dominating National Guard. NYC was ripped to pieces. Likewise, Fredo’s ratings are down 50%!”

He went on to say: “NYC, CALL UP THE NATIONAL GUARD. The lowlifes and losers are ripping you apart. Act fast! Don’t make the same horrible and deadly mistake you made with the Nursing Homes!!!” Continued Below

In another pair of tweets Tuesday, the president wrote: “New York City put on an 11:00 P.M. CURFEW last night. No wonder they ripped the place apart. Should be 7:00 P.M. CALL UP THE NATIONAL GUARD. #SAVENYC”.

“Macy’s at 34th. Street, long the largest single department store anywhere in the world, & a point of pride in NYC, was devastated yesterday when hoodlums and thieves vandalized it, breaking almost all of its large panels of storefront glass. What a shame. Bring in National Guard!” he added.

Meanwhile on Tuesday, de Blasio told reporters “We do not need, nor do we think it is wise for the National Guard to be in New York City. Nor any armed forces. When outside armed forces go into communities no good comes of it.” Video Below

Gov. Cuomo: “The NYPD and the Mayor did not do their job last night… It was a disgrace.”

We do not need the National Guard to come into New York City. When outside armed forces come into communities, especially these intense situations they have not been trained for, that’s a dangerous scenario. We have 36,000 police officers who will keep this city safe. pic.twitter.com/ZSYCxRQ5jv