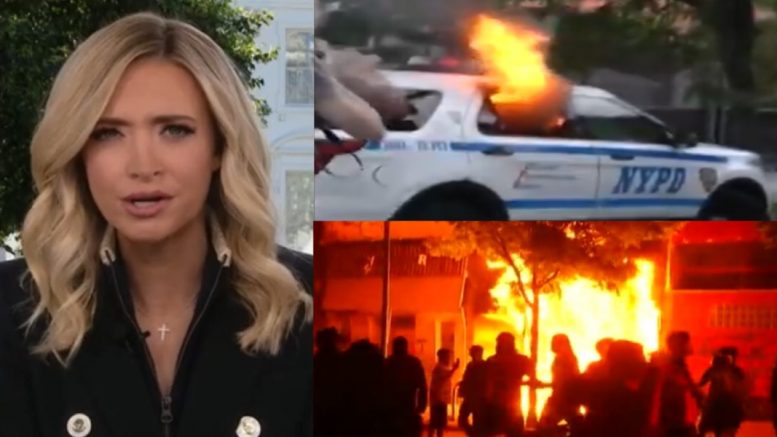 White House press secretary Kayleigh McEnany spoke with “Fox & Friends” Monday and explained what it will take to stop the far left group Antifa, amid the riots in major cities across the country in the wake of George Floyd’s death.

Kayleigh McEnany said President Trump is committed to “acting on” stopping Antifa, and revealed that he has several meetings regarding it to “keep our streets safe”.

“When you look at the Twitter feed of Antifa, you see that they are directing some of this. When you look at the horrific graffiti that you see in the streets, it’s about overturning capitalism and really crude messages. They are certainly behind this,” she said. “AG Barr has mentioned to that effect and so has Ambassador O’Brian, and criminalizing– making sure they they are labeled as domestic terrorists.”

“We’ve got to discern and distinguish this violent Antifa from the protestors who do have a legitimate grievance,” she noted.

On Sunday, President Trump said the United States will designate Antifa as a ‘terrorist organization’ in wake of nationwide riots following the death of George Floyd. Continued Below

Further, Attorney General William Barr said in a statement over the riots and domestic terrorism, “To identify criminal organizers and instigators, and to coordinate federal resources with our state and local partners, federal law enforcement is using our existing network of 56 regional FBI Joint Terrorism Task Forces (JTTF).”

Asked how the DOJ will be able to identify the organizers, McEnany said, “This task force will be looking into each and every incident that comes our way, looking at it through a domestic terrorism lens using Title [18 U.S.C. 2331].”

“And that’s a big portion of the domestic terrorism statute and it basically will give us broad investigatory power to investigate these actives and ensure the individuals that are looting, and the individuals that are Antifa and behind the violent actions we’re seeing, and the burning down of some America’s buildings, … will be prosecuted under the fullest extent of the law,” she added. Video Below

“We want to America to be safe, we want to come together as one country. We’re better than this. America is stronger than this. America is about unity. I saw beautiful videos of police officers and protestors hugging. That is what defines us as a country, not the burning of St. Johns and the looting and the rioting we’ve seen. We’re coming together as a country and that’s what our singular focus is here at the White House as we get back to work,” she concluded.

(Related: Texas Homeless Veteran Tears Into Rioters After They Burn His Bed: “What The F— Are You Doing?!”)