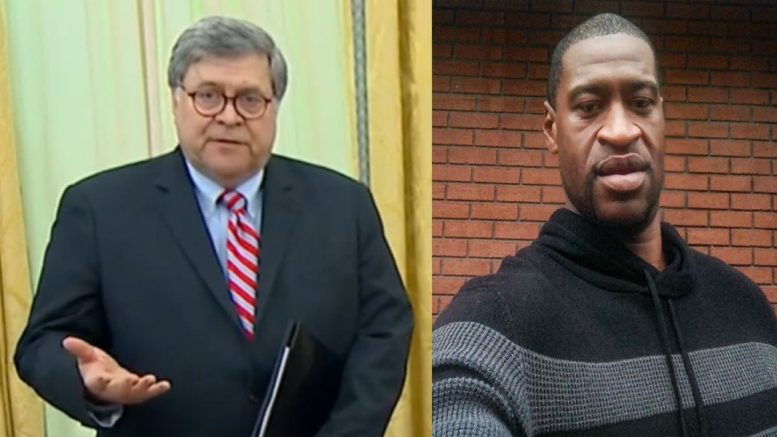 Attorney General William Barr issued a statement Friday on the death of Mr. George Floyd following the Minneapolis police officer, Derek Chauvin, who was seen in a video kneeling on Floyd’s neck until he could not breathe.

NBC News reported Friday that Chauvin has been officially arrested and charged with third-degree murder and manslaughter.

The video images of the incident that ended with the death of Mr. Floyd, while in custody of Minneapolis police officers, were harrowing to watch and deeply disturbing.

The state prosecutor has been in the process of determining whether any criminal charges are appropriate under state law. On a separate and parallel track, the Department of Justice, including the FBI, are conducting an independent investigation to determine whether any federal civil rights laws were violated. Both state and federal officers are working diligently and collaboratively to ensure that any available evidence relevant to these decisions is obtained as quickly as possible.

Under our system, charging decisions must be, and will be, based on the law and facts. This process is proceeding quickly. As is the typical practice, the state’s charging decisions will be made first. I am confident justice will be served.

President Trump announced Wednesday night that he had ordered the FBI and the DOJ to investigate the death of Floyd, calling it a “very sad and tragic death,”.

“At my request, the FBI and the Department of Justice are already well into an investigation as to the very sad and tragic death in Minnesota of George Floyd. I have asked for this investigation to be expedited and greatly appreciate all of the work done by local law enforcement. My heart goes out to George’s family and friends. Justice will be served!” he tweeted.

It was “egregious, appalling and tragic,” McEnany said. “He wants justice to be served.”

McEnany said that the video prompted President Trump to “pick up the phone” while aboard Air Force One and ask the FBI to expedite its investigation. The press secretary added that at the time of her briefing the president was being briefed on the situation by Attorney General Bill Barr and FBI Director Christopher Wray, reported MSN.

Trump on ‘Afghanistan Disaster of Exactly One Year Ago’: ‘Most Embarrassing, Incompetent & Humiliating Event in the History of the United States’