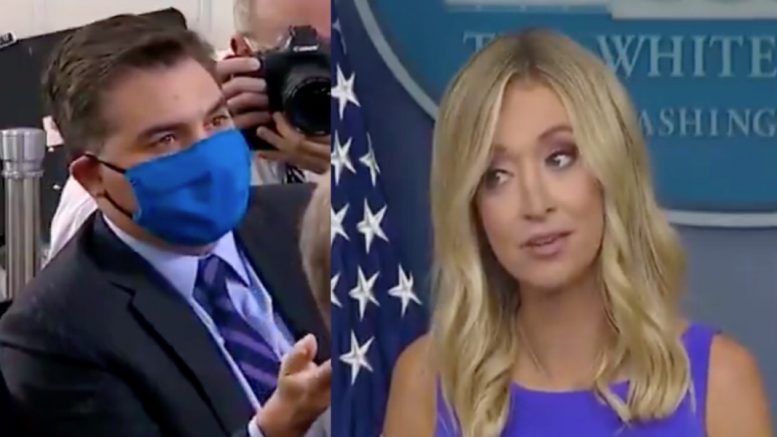 Thursday during the White House press briefing, press secretary Kayleigh McEnany schooled CNN’s Jim Acosta over fact-checking, saying, “No one that should be fact checked more than the mainstream media,” amid Twitter slapping a warning label on one of the president’s tweets pertaining to mail-in ballots.

McEnany’s suggestion came after Acosta wondered if President Trump should be “fact checked” on Twitter.

“On Twitter, shouldn’t the president be fact checked, especially this president who has made so many false and misleading statements that has put, you know, fact checkers to work across the world? I mean, he’s uttered some 18,000 false or misleading statements, according to the Washington Post. If there’s any president out there that should be fact checking a political leader, … isn’t it President Trump? And aren’t you trying to silence fact checking by going after Twitter like this?” Jim Acosta asked the press secretary.

McEnany said that she “disagrees” with “all of, if not almost all” of Acosta’s assertions.

“If you’re going to get into the fact checking business, there’s no one that should be fact checked more than the mainstream media that has been continually wrong about a number of things,” she pointed out.

The press secretary proceeded to name ABC News, who in December 2017, reported that General Michael Flynn would testify that the president directed him during the campaign to make contact with with Russians. “That was false,” McEnany said. Continued Below

“In 2017, your network CNN, botched their WikiLeaks email exclusive and were forced to make on-air corrections. CNN’s Jim Sciutto, dropped a fictional bombshell in 2018 in July, claiming that Michael Cohen would tell federal investigators that the president knew of the Trump tower meeting. And there are many more. So if anyone should be fact checked, I think it should be the media,” McEnany explained.

Acosta argued that news outlets “make mistakes from time to time” adding that “we own up to those mistakes, we correct those mistakes”, which prompted McEnany to tell the CNN reporter, “Not always. I have many that you guys haven’t owned up to.”

Acosta then claimed: “We do on a regular basis. The president never owns up to any of his false or misleading statements or outright lies. You have pledged in this briefing room to never lie to the American people. Are you saying that the President of the United States has never lied to the public before?” Video Below

The White House press secretary also told Acosta that she is “around the president” and “his intent is always to give truthful information to the American people”.

“You mentioned that the media apologizes for their mistruths. I mean, I’m sitting here looking at other headlines; the New York Times saying there aren’t enough ventilators to cope with the coronavirus. In fact, we had an access of ventilators we shipped around the world. Washington Post– U.S. health system is showing why it’s not ready for a coronavirus pandemic, we’re ready,” she read off.

She further noted there are “many more” headlines she could list on the coronavirus specifically, but said, “I don’t think that’s what the American people want to hear”.

"There is no one that should be fact checked more than the mainstream media that has been continually wrong about a number of things."pic.twitter.com/TCApd99Rnp

President Trump is crafting an executive order on social media that could seek to curb legal protections for the industry, a broadside that comes amid his escalating fight this week with Twitter over the company’s decision to fact-check his claims for the first time, Fox News reported.

The president tweeted an announcement Thursday morning, saying: “This will be a Big Day for Social Media and FAIRNESS!”

The executive order and the development of the commission come amid a fight between the president and Twitter, after the social media giant fact-checked one of his tweets for the first time this week. The president, on Wednesday, warned social media companies that the federal government could “strongly regulate” or “close them down” if they continue to “silence conservative voices.”

Trump’s warning Wednesday came after Twitter slapped a warning label on one of the president’s tweets, referring to mail-in ballots Tuesday, cautioning readers that despite the president’s claims, “fact checkers” say there is “no evidence” that mail-in voting would increase fraud risks and that “experts say mail-in ballots are very rarely linked to voter fraud.”

President Trump, within minutes on Tuesday, accused Twitter of “interfering in the 2020 Presidential Election based on fact-checking by Fake News CNN and the Amazon Washington Post,” while adding that the platform is “completely stifling FREE SPEECH,” and vowing that “I, as President, will not allow that to happen.”

Twitter inserted a label to the bottom of the tweet reading, “Get the facts about mail-in ballots.”