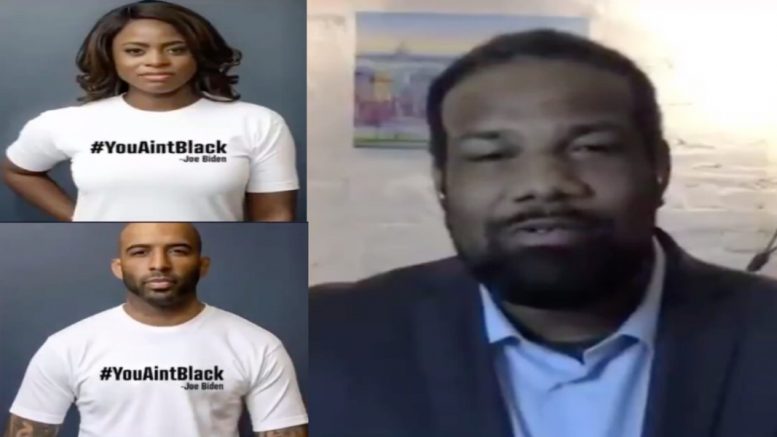 On Friday, the Trump Team unveiled a “#YouAintBlack” T-shirt, after presumptive Democratic nominee Joe Biden ignited a virtual firestorm, when he claimed during a virtual live-stream with radio show host Charlamagne Tha God from “The Breakfast Club”, that if you support President Trump “then you ain’t black.” Biden eventually walked back the statement.

Joel Payne a political analyst and a Democratic strategist, who worked on Hillary Clinton’s 2016 campaign, suggested Sunday on CBS News that the models online who posed for the #YouAintBlack” T-shirts, may not really support President Trump.

Asked how the Biden campaign can combat the aggressive moves online by the Trump campaign, Joel Payne deflected, which instantly backfired.

“It’s so interesting the two models that you show, showing those shirts, I wonder if they’d actually vote for Donald Trump,” Payne said.

“That might be a good question for an industrious journalist to go dig into,” he added.

Katrina Pierson, senior advisor to President Trump’s 2020 campaign, responded on Twitter Sunday to Payne informing him that the two models that were pictured modeling the T-shirts “are full-time staff working hard to re-elect our President”. Continued Below

Pierson tweeted: “Fact Check: CBS News [and] [Joel Payne] assuming that [Harrison Floyd] and [Ms. Gail Wilson] were victims of ‘being used as models’ and curious to know if [they] actually support @realDonaldTrump?”

“Answer: YES. In fact, they are full-time staff working hard to re-elect our @POTUS. @TeamTrump 2020,” she added.

Katrina Pierson also posted pictures of Floyd and Wilson working on the Trump campaign to provide proof. Video Below

Joel Payne later acknowledged his error, saying “my bad” in a tweet: “Super embarrassed @TeamTrump- I think I’ll go inject some bleach 😳. PS – I probably should not have made that assumption about @HW_Floyd and @MsGailWilson, my bad,” he wrote.

Fact Check: @CBSNews @paynedc assuming that @HW_Floyd & @MsGailWilson were victims of “being used as models” and curious to know if the actually support @realDonaldTrump?

In fact, they are full-time staff working hard to re-elect our @POTUS. @TeamTrump 2020🇺🇸 pic.twitter.com/ywiRhELhvx

Joel Payne walks back his claim:

Super embarrassed @TeamTrump – I think I’ll go inject some bleach 😳. PS – I probably should not have made that assumption about @HW_Floyd and @MsGailWilson, my bad – welcome them on my podcast to discuss their candidate’s AfAm agenda https://t.co/tY7W9KhyDf

Hey @cbsnews, look at our model, we mean our full-time staffer who is the Black Voices for Trump Executive Director.

After Being Called A ‘Damn Liar’ By Joe Biden, Voter Has A Standoff With Another Voter: “Stick It Up Your A–, Fella”