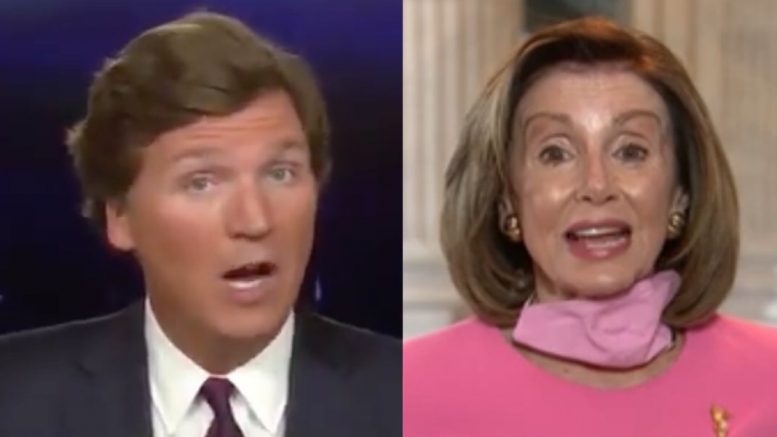 House Speaker Nancy Pelosi (D-CA) caused a stir on Monday evening after she publicly labeled President Donald Trump as “morbidly obese”. Pelosi made the remark after CNN’s Anderson Cooper pressed her on what she thought about the President revealing that he has been taking hydroxychloroquine as a preventative measure for the COVID-19 pandemic.

On Tuesday, Fox News’ Tucker Carlson ripped Pelosi for her body-shaming comments toward the president, as she had appeared to question the Commander in Chief’s use of hydroxychloroquine.

“Nancy Pelosi believes abortion is a sacred medical decision,” Tucker Carlson said. “It’s a choice that involves a woman and her doctor, and that’s it. Everyone else can shut up and applaud. But on the question of how to treat the coronavirus, Pelosi is happy to judge. After the president announced his physician gave him a drug called hydroxychloroquine as protection against the virus, Pelosi exploded. This is one medical decision Nancy Pelosi does not believe should remain between a patient and a doctor.”

Carlson played a clip of Pelosi’s comments she had made on CNN, in which she told AC360: “I would rather he not be taking something that has not been approved by the scientists, especially in his age group, and in his, shall we say, weight group: ‘morbidly obese,’ they say.”

The Fox News host continued: “Got that? Not only is Trump taking an immoral pharmaceutical, but he’s fat. Morbidly obese is how Pelosi put it. Now we make on this show a real effort not to mock people for how they look. It isn’t always easy, but we really do try. Nancy Pelosi should try, too. Why?”

He proceeded to show a recent picture of Pelosi, then said: “She turned 80-years old in March. Does she look 80? No. More like 37. Now how is that possible? If you guessed diet and exercise, we’re not going to argue with you because we don’t know for sure. And we don’t really want to know. But we would remind the Speaker of the House that people with glass faces should not throw stones.” Video Below

TUCKER ON PELOSI: "People with glass faces should not throw stones." 🔥 pic.twitter.com/zJ3awHfOhS

Asked Tuesday by a reporter about Pelosi’s “morbidly obese” remark, President Trump broke his silence calling the House Speaker “a sick woman” with “a lot of problems”.

“I don’t respond to her; I think she’s a waste of time,” the president told a reporter.

“These people are sick. Pelosi is a sick woman; she’s got a lot of problems, a lot of mental problems,” he later expressed. “We’re dealing with people that have to get their act together for the good of the country.”

Trump: ‘Based on the Gableman Report, I Would Imagine That There can Only be a Decertification of Electors’