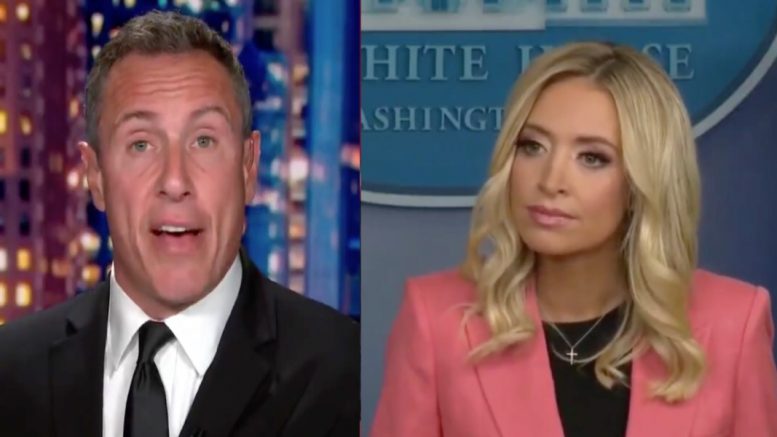 Amid criticism and questions from reporters, White House press secretary Kayleigh McEnany defended the president’s use of hydroxychloroquine as a preventive measure against COVID-19.

“Yes, the doctor did prescribe it for him. And he took it after having several discussions with Dr. [Sean] Conley about its efficacy,” McEnany told David Brody of CBN News.

“No one should be taking this without a prescription from their doctor, but that being said, I’ve seen a lot of apoplectic coverage of hydroxychloroquine. You had Jimmy Kimmel saying the president’s ‘trying to kill himself’ by taking it, you had Joe Scarborough saying, ‘This will kill you.’ Neil Cavuto saying, ‘What have you got to lose? One thing you have to lose are lives,’” McEnany told reporters.

McEnany also exposed CNN’s Chris Cuomo, saying that while he “mocked” President Trump for taking hydroxychloroquine, the CNN anchor “took a less-safe version” of the drug himself.

“You had Chris Cuomo saying the president knows that hydroxychloroquine is not supported by science, he knows it has been flagged by his own people and he’s using it,” McEnany said. Continued Below

“Cuomo mocked the president for this, and interestingly, I found this out before coming here, hydroxychloroquine is an approved medication with a long proven track record for safety. And it turns out that Chris Cuomo took a less safe version of it called quinine, which the FDA removed from the market in 2006 because it had serious side effects, including death. So really interesting to have that criticism of the president,” the White House press secretary explained.

On Monday night, Chris Cuomo questioned whether President Trump actually was taking hydroxychloroquine, claiming he believed it was “a beautiful distraction” that “speaks to optimism” about reopening the country.

McEnany further pointed out that Chris Cuomo’s own brother, Gov. Andrew Cuomo (D-NY), “has several on-the-record statements about hydroxychloroquine,” including that “I’m an optimist I’m hopeful about the drug, and that’s why we’ll try it here in New York.” Video Below

.@PressSec Blasts the Media for their coverage of Hydroxychloroquine and calls out @ChrisCuomo for criticizing President Trump for taking it while he took a less safe version of the drug. pic.twitter.com/ugR7LbFO9N

As reported by the Daily Caller:

Cuomo had been using a version of the anti-malarial drug in his own treatment for coronavirus, according to posts about his treatment protocol written by his wife, Cristina, in her wellness magazine “The Purist.”

In her week one post, Cristina Cuomo detailed all of the antivirals her husband took after he was diagnosed with COVID-19 on March 31, one of which was “potentized quinine,” taken “3x daily.” In her second post, Cristina explained her usage of the drug. Continued Below

“Potentized quinine (OXO); it’s derived from the nontoxic bark of Peruvian-grown quinine plants. It is a natural antibiotic (it’s being used in India with very good results). This is not on the market here; Dr. Lancaster has made this in her lab for 40 years, and I took this for my Lyme. (The medicine Plaquinol, which many doctors are using for COVID-19 is similar to quinine, but it has negative side effects.)”

Quinine is also an anti-malarial drug. Chloroquine is its synthetic derivative.

Why did Pres. Trump’s reveal he is taking hydroxychloroquine?

As a distraction from his lack of a plan or real solutions, warns @chriscuomo: “Don’t take the bait.” https://t.co/9rkCGlK82G pic.twitter.com/O7TbrcTqFX