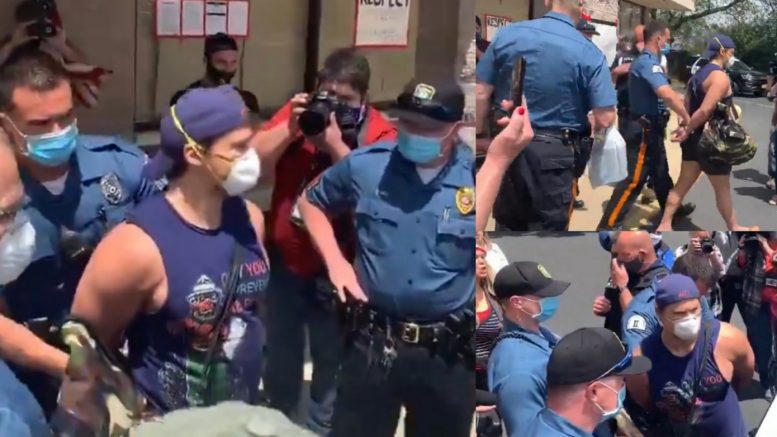 A New Jersey gym member was handcuffed, arrested and taken away in a police SUV on Wednesday after he and other members of Atilis Gym in Bellmawr were cited for defying Governor Phil Murphy’s coronavirus-related lockdown order.

The incident was caught on camera by one of many angry bystanders who witnessed the situation as it unfolded.

According to the Philadelphia Inquirer, gym owners Ian Smith and Frank Trumbetti, were initially charged with a disorderly person’s offense on Monday after opening their gym in defiance of the governor’s orders.

The pair of owners were then charged with the same offense early on Tuesday and warned by law enforcement that more action could be taken if they don’t close. The gym, however, remained open, which led to police issuing citations to members as they left the facility.

As per the Inquirer:

“One member, who later identified himself only as Matt, 39, of West Deptford, was arrested and charged with obstructing the administration of law, after he declined to give officers his name, and with violating the governor’s executive order.” Video Below

As the arrested gym member was walked out to his car by authorities, bystanders are heard on video yelling things like “We live in a Communist country!” and “Criminals are being released from jail and a man who wants to exercise is being arrested!”

BREAKING: Bellmawr police have arrested a man who was working out inside Atilis Gym. It’s unclear what the charge is. pic.twitter.com/ljjxpEAJdB

After leaving the police station, Matt, the man who was arrested, told The Inquirer, “I asked them why they needed my name and the next thing I knew they were handcuffing me.”

“It was quite the surprise. I wasn’t expecting that,” he added.

Kellyanne Puts Reporters On The Spot Over Rumor Of WH Official Calling COVID-19 ‘Kung Flu’: “Tell Us Who It Was”