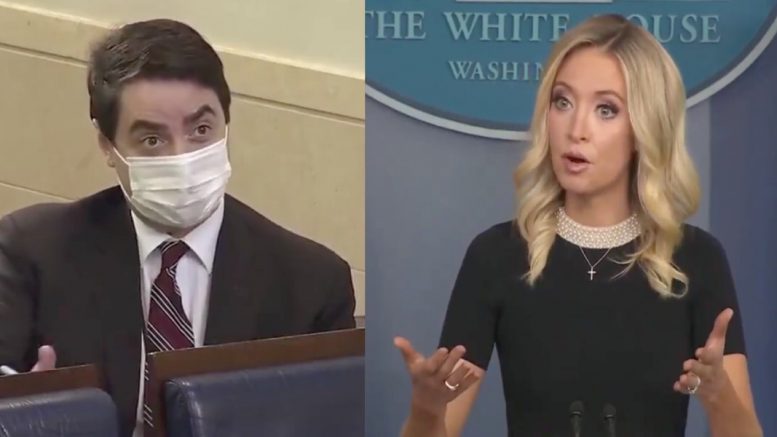 Kayleigh McEnany, the White House press secretary, called out reporters on Friday for their “lack of journalistic curiosity” in what the Trump administration believes to be the miscarriage of justice in the criminal case surrounding retired Army Lt. General Michael Flynn.

CBS News Radio correspondent Steven Portnoy asked McEnany about remarks the Commander in Chief made in a recent interview where he suggested that people “should be jailed” for the “very obvious crime” that was committed against the former national security advisor.

“You’re an attorney and the president’s spokesperson. Perhaps you could lay out the elements of this crime. What crime was committed and in what way?” Steven Portnoy asked.

“I assume you’re referring to the Obama administration and the unmasking,” McEnany responded.

“What the president calls ‘Obamagate,’ what is it? What are the elements of that crime?” Portnoy wondered.

“Yeah, I’m really glad you asked because there hasn’t been a lot of journalistic curiosity on this front. And I’m very glad that you asked this question,” the McEnany told Portnoy. Continued Below

McEnany pointed to the “number of questions” that were raised by the “actions” the Obama in the administration, naming the Democratic National Committee-funded Steele dossier and its involvement in the FISA warrants that were granted to surveil former Trump campaign advisor Carter Page, as well as the unmasking of Flynn by top Obama officials during the transition period between November 2016 and January 2017.

She also noted the Oval Office meeting that took place just days before Trump’s inauguration between former President Barack Obama, former Vice President Joe Biden, and former acting Attorney General Sally Yates, who McEnany emphasized “learned” about the unmasking from Obama and not from the Justice Department or the FBI.

“We know that there was a lot of wrongdoing in the case of Michael Flynn. The FBI notes, for instance, that said, ‘Should we,’ quote, ‘get him to lie,’ as they pontificated their strategy,” McEnany said. Continued Below

“We know that the identity of this three-decade general was leaked to the press — a criminal leak to the press of his identity in violation of his Fourth Amendment rights. These are very serious questions. They’ve been ignored by the media for far too long. And I’m very glad that I think that is the second question that I have fielded on Lieutenant General Michael Flynn because justice does matter. Those questions, they matter,” the White House press secretary explained.

Portnoy then asked McEnany what specifically was the “crime,” which McEnany reiterated was the leaking of Flynn’s name to the press in January 2017.

The White House press secretary detailed other moments from Obama officials who had lied to Congress and also leaked to the press. Video Below

Portnoy asked McEnany if the individuals she listed were the people the president thought should be “in jail,” but she pushed back, insisting that journalists should look into what she “laid out.”

“That is, after all, the job of reporters, to answer the very questions that I’ve laid out, and I hope you guys will take the time to do it,” the press secretary told Portnoy.

"For 3 years you all talked about collusion & there was none. It was a huge injustice, not just to this administration but to the American ppl who deserve truth, not the alleging of absolutely false allegations against @POTUS." pic.twitter.com/ID6Ex47fSd

Twitter and Google user “The Panda Tribune“, modified the interaction between McEnany and Portnoy, propping her up as a warrior against the leftist media. We leave you with that video.

Sarah Sanders Reveals Blistering Passage Of Bolton From Her Forthcoming Book: “A Man Drunk On Power Who Ultimately Betrayed America”